The earthquake damage to Kaikoura is worse than he thought, Prime Minister John Key has said, after flying over the region.

A magnitude 7.5 quake struck near Hanmer Springs at 12.02am on Monday. It was 16km deep and has been followed by hundreds of aftershocks.

Two deaths have been linked to the quake, and more than 20 people have been injured.

People in the town of Kaikoura, on the east coast of the South Island, near the location of the quakes, have been cut off, with no way via land in or out.

Mr Key and Mr Brownlee estimated the clean-up would run into the hundreds of millions of dollars, and that clearing the debris and blocked roads could take months.

The repair bill for the wider region could even run into the billions, the prime minister said.

Speaking to reporters after landing in the town, he said there were some immediate priorities, as Kaikoura was now completely cut off from the rest of the country.

"Making sure we get more water, food and ultimately people in here to support the nearly 600 people who are at the welfare centre because the road access points are blocked off.

"There are quite a number of tourists now who are ultimately stuck with international connections so we'll have to think about that.

"There's also the longevity of the businesses here that in the short-term aren't going to get a lot of custom as there are no access points in or out."

Mr Key said he hoped there were no cars buried under the several slips along the coastal roads.

"So the slips here are horrendous ... and you've got to believe it's in the billions of dollars to resolve these issues, they're huge slips ... I'm not sure how long it will actually take to move this level of rubble off the road, not to mention the damage to the railways.

"It's a very, very big job for both the [New Zealand] Transport Agency and KiwiRail."

A retired man who lived at Elms Homestead in Kaikoura died when it collapsed, while another occupant was rescued from the rubble in the early hours.

The man's body had been removed.

A second person died at a house in Mt Lyford, north of Christchurch.

A doctor at Kaikoura Hospital told RNZ six seriously injured people had been airlifted to Christchurch and the hospital was treating 15 others with minor injuries.

Dr Chris Henry, who himself was nursing a cut on his arm, said most patients had cuts and bruises and broken bones.

A number of sick people who depended on home oxygen had also come into the facility, he said.

"Our main issue in the community is that we have a real problem with water at the moment," Dr Henry said.

"We would very strongly urge everybody to preserve water as much as they possibly can, and the second thing that goes along with that is being very careful about hand hygiene because the lack of water and sewage is a bit of a recipe for infection outbreaks."

Kaikoura's chief fire officer, Ian Walker, said the damage to roads in the region was the worst he had ever seen.

He said there was no power and no water in the town, and his priorities were now on cleaning up.

He said people in vehicles caught between slips had to be rescued by air.

"On the state highway, I mean there's just metres and metres of damage - and the roads are gone and it looks like the seabed's actually come up."

As the chopper carrying the political leaders surveyed damage over the wider area, further earthquakes hit and dust from rockfalls and slips could be seen.

"That's a goodie," one of the pilots commented as the quake hit.

The crew also ran through what other defence force personnel had been doing through the day. Some had gathered supplies to take into Kaikoura. A number of NH90s were preparing to take in tonnes of food, water and other supplies tomorrow.

About 1200 tourists were thought to be stranded in and around the town, and the government was looking at options to try and help them get out.

Mr Key said Defence Force aircraft might be used, and the HMNZS Canterbury was on its way. 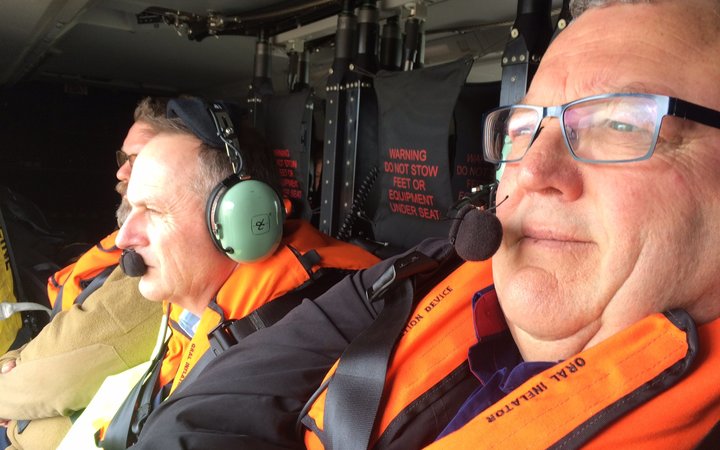 Minister may be assigned to deal with earthquake recovery efforts - Key

Mr Key said his message to the people of Kaikoura and other affected areas was that the government was not blind to the size of the problem facing them.

This was too big a problem to leave to the locals to deal with, he said.

"I don't think it would be fair or reasonable just to leave it to the local people, I think there's just too much to get done, there's too many moving parts here, so I think we are going to have to think about exactly who we're putting in there.

"At the moment very temporarily extra police and the likes have been dispatched but because of the sort of medium-term nature of this I would have thought you were going to need more people to really make sure that every request is met."

He said assigning a specific minister to the recovery was a possibility, or - at the least - a senior person that people could go to with any requests.

Mr Key said Finance Minister Bill English and Transport Minister Simon Bridges would have to travel to the region to see the devastation for themselves.

He said health services in Kaikoura were managing well.

Dr Coleman said there had been no damage to the new 24-bed Kaikoura Hospital, and although the local pharmacy had been damaged, medicines had been recovered and were supplying local needs.

But he said many people were stressed and anxious.

"It is a stressful time for people and so as a result of that Healthline's brought in six additional mental health professionals and another 10 nurses to cope with the demand - but apart from that Wairau Hospital [is also] undamaged and coping well."

"This is a town that is based on tourism, that needs tourist traffic, is now isolated.

"You've got hundreds of tourists here who are going to be wanting to get out in the next few days, just getting supplies and provisions in, that's going to need extra help as well, so I think you know anything the government can do to make sure people can get in or out, that supplies can get in and out, obviously we'd support that.

"This is not a time for politics, this is a time for supporting a community that's doing it really tough at the moment."