US Secretary of State John Kerry says the Obama administration will continue to push for action against climate change until it formally hands over the White House in January.

That included through the Paris Agreement, he said.

Mr Kerry arrived in New Zealand yesterday after becoming the first US secretary of state to visit Antarctica.

After a meeting with the Prime Minister in Wellington, Mr Kerry said the evidence climate change was happening was overwhelming, and the US should live up to its responsibilities.

President-elect Donald Trump previously described man-made global warming as a conspiracy created by China, and campaigned on withdrawing the US from the Paris agreement.

NZ and US 'peaceful neighbours'

US Secretary of State John Kerry spoke to media this morning, saying the US is grateful that NZ has become such a key contributor to global peace and security.

He said US President Barack Obama and the US could not be more excited for their tremendous relationship with NZ.

"Both NZ and the US are bordered by large oceans and by peaceful neighbours," he said. 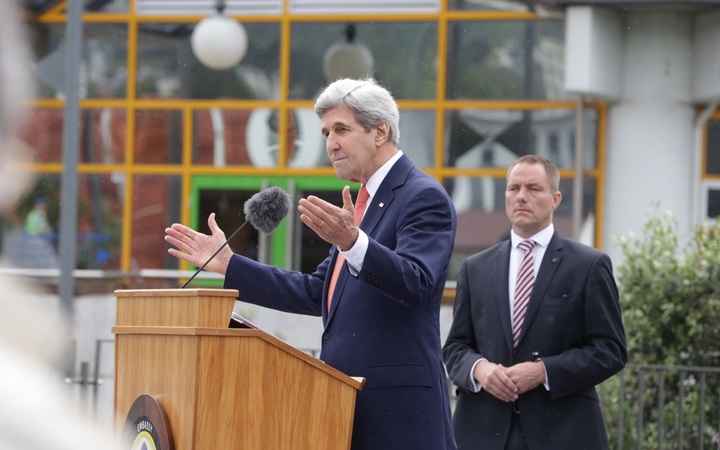 "Yet in today's world of interconnected travel and communications, those qualities don't protect either of us completely from dangers that exist and originate thousands of miles away.

"Many of the challenges we face are not going to be confronted by NZ alone or by the US alone, as much as we would wish that.

"So the US is grateful that NZ has become such a key contributor to global peace and security, including through their recent and very productive term on the UN security council."

"The TPP was never envisoned, nor is it envisioned today, [to] be about China. The TPP is about economies, it's about people, it's about prosperity."

"The United States welcomes the peaceful rise of a great nation like China ... We're not looking for competition or conflict, we're looking for co-operation, and we have found it in many ways on climate change.

"We're hoping to find it on development policies and other things that we are working on."

Mr Kerry said the scientific community had concluded that climate change was happening beyond any doubt and the evidence was there for everybody to see.

"The question now is ... how we will implement the Paris Agreement. We intend to do everything possible to meet our responsibilities to address this threat to life itself on this planet."

He said people would have wait and see where the TPP debate wound up as the new administration takes power.

Mr Key said NZ's relationship with the US was in the best shape it had been in for decades, because of the work of Mr Obama and Mr Kerry.

A long-time supporter of action against climate change, Mr Kerry has previously said there will be a smooth transfer of power as climate change denier Donald Trump moves into the White House.

Mr Trump promised during his campaign to withdraw the United States from the Paris Agreement signed by 195 nations, which aims to reduce greenhouse gas emissions.

Mr Kerry returned from a flying visit to Antarctica yesterday, where he toured the US base at McMurdo Station and New Zealand's Scott Base.

Later today, Mr Kerry will lay a wreath at Pukeahu War Memorial Park and unveil a plaque at the site of a future US memorial.