Screening of MPs emails would be "shocking" and a breach of privilege, government minister Peter Dunne says.

Labour MP Chris Hipkins has called for an urgent investigation after Parliamentary Service told him one of his emails had been blocked because of a security classification on the attached document.

National Party senior whip Tim Macindoe said it would be concerning if Parliamentary Service had overstepped the mark when dealing with MPs' communications.

Parliament Speaker David Carter is due to report back today and Mr Macindoe said he would be interested to hear his response.

Mr Macindoe said he was unaware of any incidents that prompted Mr Hipkins' comments to the House, but all MPs would be concerned to ensure that their legitimate activities were not being interfered with. "I'm hoping that the issue will be able to be resolved quickly." 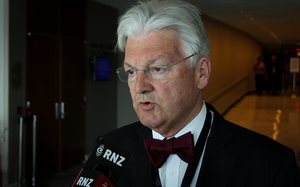 Government minister and United Future leader Peter Dunne has gone further, saying the actions of the department that was supposed to support MPs, not monitor them, were shocking.

He said that was a clear breach of privilege, as MPs' communications should not be interfered with.

Several years ago Parliament's Privileges Committee considered how Parliamentary Service should handle MPs communications and information, after it passed some of Mr Dunne's emails to a government inquiry.

"What concerns me about this is it just simply seems the Parliamentary Service hasn't learnt any lessons."

He said part of the problem was the service treated MPs as its employees, when legally they were not.

"So consequently they try to lump us all into the same set of rules.

"In the case of Members of Parliament, it's frequently the case that constituents will send you their details on a confidential basis if they've got particular problems they want you to sort out, and they do so because they've got the confidence that that material is not going to be shared more broadly.

"I think yesterday's revelations shatter that confidence and go to the core of a public trust issue."

In the meantime, Mr Hipkins, Labour's chief whip, has received a more detailed email response from Parliamentary Service explaining how the "SEEMail" email system for MPs and staff worked.

It said SEEMail was an "all of government secure messaging system that we subscribe to" and that "SEEMail classified messages can only be sent to-from approved government departments and agencies".

None of the other political parties contacted by RNZ News had experienced any problems with their emails, such as those raised by Mr Hipkins.