The government, having passed its plain packaging legislation, is confident it could win any legal action taken by tobacco companies. 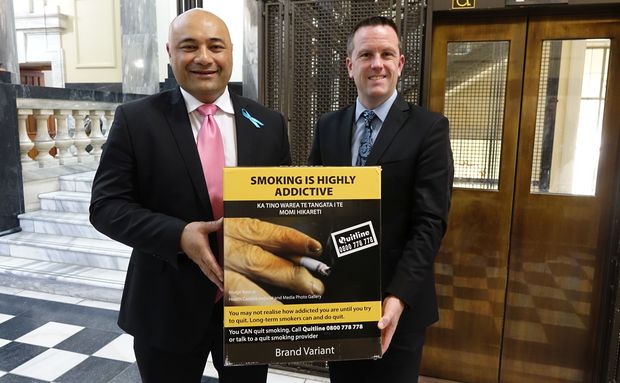 The bill was first introduced to Parliament three years ago but only passed its final hurdle last night, after it was put on hold when tobacco companies tried to sue the Australian government.

Under the new rules, cigarettes will be in bland brown or green packaging, mandatory health warnings will cover at least three quarters of the packet and tobacco company logos will be removed.

But the government said it was confident it could win any legal action taken by tobacco companies.

Associate Health Minister Sam Lotu-Iiga said the legislation was part of the government's goal for New Zealand to be smokefree by 2025.

"We can't determine what will happen in the courts, but we feel like we've seen the evidence from overseas, we're pretty comfortable with that, and we're going to move forward," Mr Lotu-liga said.

"This bill takes away the last means of promoting tobacco as a desirable product," he said.

"It stops the promotion of smoking as cool, fun, glamorous, and it sends a clear message that this government is serious about ending premature deaths related to tobacco use."

About 13 people a day die from smoking-related illnesses.

The Labour Party supported the bill, but its health spokesperson Annette King said even with the threats, the government should have been brave and passed the legislation earlier.

"It does overlook how many lives could have been saved and this is where the Cabinet did not show the internal fortitude that was needed to get this bill through in a timely manner," she said.

"Red for instance is a strong flavour, green is coolness or menthol, white packs are low-tar [and] you hear words like slim or mild that are intended to project an idea that some cigarettes are less harmful than others," he said.

ACT and New Zealand First were the only parties to oppose the bill.

"If they were going to smoke, they smoke anyway," she said. "Because most of them do not smoke the packet, they smoke what is inside the packet - that is what is attractive."

Exactly how brand names will appear on the packs, and other design details such as colour, fonts and arrangement, are yet to be decided. It is expected plain packages will be on the shelves from next year.