Legislation requiring tobacco products to have plain packaging has passed its final hurdle in Parliament. 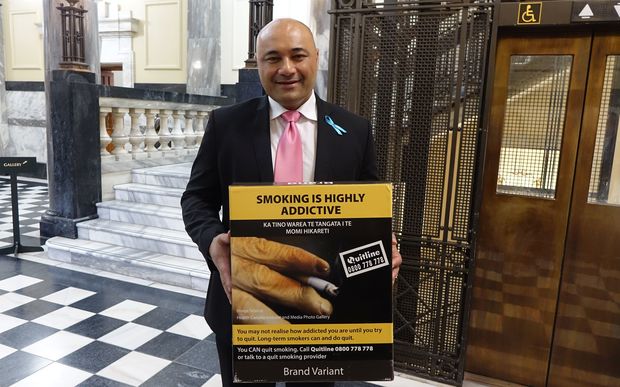 Associate Health Minister Sam Lotu-Iiga with an example of the plain packaging after the bill passed its third and final reading in Parliament. Photo: RNZ / Mei Heron

The bill was first introduced in 2013 before legal action by tobacco companies in Australia put the legislation on hold.

However, that challenge failed last year.

Under standardised packaging all cigarettes and other tobacco products would be in brown or green coloured packaging, similar to what is required in Australia.

Brand names would be allowed, but there would be restrictions about how and where they could be printed.

Associate Health Minister Sam Lotu-Iiga said the passing of the legislation sent a clear message the government was serious about ending the unnecessary deaths from tobacco use.

"The bland packs will maximise the impact of health warnings and cut out any false impression that smoking is cool or glamorous," he said.

"Standardised packaging, along with the existing suite of tobacco control measures and quit-smoking services, is a logical next step towards the Smokefree 2025 goal."

Regulations needed for the law to come into force are currently under development following a public consultation that closed at the end of July.

New Zealand First and the ACT Party were the only parties to oppose the bill.