Police have enough resources to attend all home burglary calls, as required by their new approach, the acting deputy commissioner says.

Police Minister Judith Collins said home burglaries would be treated as priority offences from today and police would attempt to attend all calls from now on.

Figures have shown the number of burglaries around the country rose by more than 10 percent over the last year, but very few cases were solved.

The public could expect a police officer or crime scene investigator to visit nearly all of the homes that were burgled, Ms Collins said.

There would be some times when they could not attend, for a range of reasons including adhering to the wishes of the victim, she said.

Acting Deputy Commissioner Allan Boreham told Checkpoint with John Campbell his district commanders had informed him they had the resources to attend all calls.

He said there were about 35,000 home burglaries a year - about 100 a day - and police had previously attended "most" of those.

"I think we would have been attending probably well over 70 percent of them but we just don't have the accurate figures for that.

"But we do now going forward, we've put a system in place so we'll know whether we have attended them or not," Mr Boreham said. 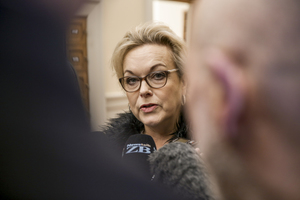 Minister of Police Judith Collins said she expected the number of resolved burglary cases to increase as a result. Photo: RNZ/Rebekah Parsons-King

The resolution rate was sitting at 9.8 percent, and it had previously been lower, at 8.9 percent, which was in line with international statistics, he said.

"It's definitely not window dressing, this is what we come to work for, John, and if we can do anything better around burglaries we are going to do it."

Police had been working on improving the burglary response rate before the minister had spoken to them, and it was "likely we would have ended up in this place anyway".

He said police were looking to increase burglary resolution rates by responding to forensic evidence more urgently to get the best evidence from crime scenes.

Ms Collins said the move from considering burglary as a volume crime to a priority one would send a clear message to criminals.

"I would expect that there will be an increase in resolution rates," she said.

"We're certainly seeing that where police have been targeting burglary around the country - particularly in Auckland - that there was an immediate uptick in the resolution rate.

"And that sends a very strong message to burglars that they will be found."

Figures released in July showed the number of reported crime victims had risen by about 3.1 percent between 2014/15 and 2015/16. About 72 percent of the increase was due to burglaries.