The latest foreign home buyer data has 'more holes in it than Swiss cheese', New Zealand First leader Winston Peters says, but the government says the information is watertight.

On Monday, Land Information (LINZ) updated government figures to show the total number of homes bought between April and June by people who pay taxes overseas remained at 3 percent, unchanged from the previous quarter.

But it has conceded its information is still unreliable.

The government started collecting the data last October to get a better picture of the residential housing market.

Mr Peters said Land Information should stop doing the government's work and start getting information that was accurate.

"What they have presented is shot full of holes. It's got more holes than Swiss cheese and yet they're purporting to get conclusions from it.

"It's simply not true.

"Every single transfer is captured and the purpose of this was predominantly around making sure that people buying and selling property for profit pay their fair share of tax."

The figures may not include a purchase by a foreign student or temporary worker who had tax residency in New Zealand, but is likely to include the sale of that property, she said.

The survey also asks whether the person is a New Zealand citizen or resident, the minister said. People were not completing a question relating to work or student visas-holders' intention to live in a house but that would be corrected in time.

Labour Party housing spokesman Phil Twyford said the data was a "'shonky" and deliberate attempt to confuse the deabate about foreign buyers in the New Zealand real estate market.

"Some overseas students come here for an education, they buy a house, they sell it two or three years later.

"They might make two or three hundred thousand dollars capital gain from that property. That effectively funds their education and their life here."

Land Information deputy chief executive Russell Turner said one survey question, where work or student visa holders are asked whether they planned to live in the house they bought, was causing confusion.

He said it would not have been appropriate to have delayed the release of the data.

"What we need to make sure we have is a fairly extensive set of data around question 2.2 and that will take probably at least 12 months in order to get. So it's not really appropriate to delay the release of the data but to improve the quality of the question."

Labour Party leader Andrew Little said the department should have waited to release the data. 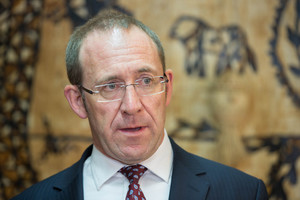 "You've got to wonder whether LINZ has come under some political pressure to actually release this data because it happens to suit the government to underplay and understate the role of non-resident offshore buyers in our property market.

Land Information said the data was not supposed to be a register of foreign ownership.