The Panama Papers revealed how some of the world's richest people use foreign trusts, including in New Zealand, to hide their wealth and avoid paying tax.

In June, the European Parliament set up a special committee to investigate matters that were raised by the papers and it wants to blacklist countries that are operating as tax havens.

Mr Woodhouse was aware of this because of the European Parliament's website but did not believe the government had received official notification of any investigations or any action against New Zealand. 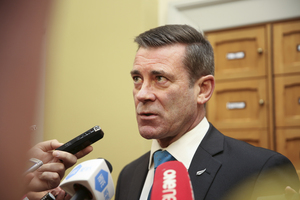 But the government was confident "any objective inquiry" would find New Zealand was fully compliant with OECD standards.

"New Zealand is fully compliant against the OECD standards and 16 of the 28 EU nations are partially compliant - behind New Zealand," he told Morning Report.

Mr Woodhouse said the government had already made changes to the country's disclosure rules for foreign trusts, following the Shewan Inquiry.

New Zealand's tax settings were sound by international standards, but government was always open to making improvements if that was warranted, he said.

Tax specialist John Shewan, who carried out a review of New Zealand's foreign trusts after the papers were leaked, is confident this country would have nothing to worry about from an EU investigation.

"Our reputation is excellent and I think we'll get a completely clean bill of health from any review that is undertaken."