A prison volunteer who was stood down for being a patched Black Power member says the Department of Corrections knew that was the case when it allowed him to work with prisoners.

Whanganui Black Power member Ngapari Nui was stood down from his position as kaiwhakamana for prisons after his gang links were pointed out to Corrections Minister Judith Collins.

Mr Nui has been with the gang for 38 years, and volunteered in prisons for about five.

Earlier this week, Corrections chief executive Ray Smith said Mr Nui had declared his gang connections but not that he was patched.

The department said today that Mr Nui was stood down on Monday, after it learned about his patched status on Friday.

Mr Nui told Checkpoint with John Campbell he had signed multiple disclaimers saying he was affiliated to the gang during his volunteer application process.

Mr Nui said, when he first applied five or six years ago, he wrote "I have associations with Black Power", in response to a question on the form that asked if he had any gang affiliations.

"I thought that would be an issue at the time and I was quite surprised myself that they accepted. They knew I had gang connections.

"There was another review done a couple years ago, same process again, I had to go through and again I had to sign it off and make it clear I did have gang connections.

"I did ask the person who was helping me fill it out: 'I'm a gang member, would there be any issues about me, would that stop me from getting back in again?', and he said 'no, there shouldn't be any issues', but it had to go to be signed off."

Ms Collins should have approached him and his iwi before going public about his dismissal, he said.

"She's like a bull out of the paddock, who comes rushing in without sitting down and thinking before making a statement like that."

'I don't push for anyone to become a gang member'

Mr Nui told Checkpoint his focus had always been on his iwi and family and he never tried to recruit in prisons or elsewhere.

He had discouraged community and family members from joining the gang and was pleased his nephew and sons lived in Australia, away from the gangs back home.

He had been a patched member of Black Power for 38 years and stayed because he believed he would be more effective as a member than if he gave his patch up.

"Because... once you finish with whatever organisation it is then your role is finished within there and you don't hold the same mana," he said.

"Our boys understand that I have a hands-off role, because there are things that I have to move forward, the changes in my life, and my focus is on iwi, hapū, marae and whānau, kaupapa.

"There's the good, the bad and the ugly, and that's what being a gang member is, so I don't push for anyone to become a gang member." 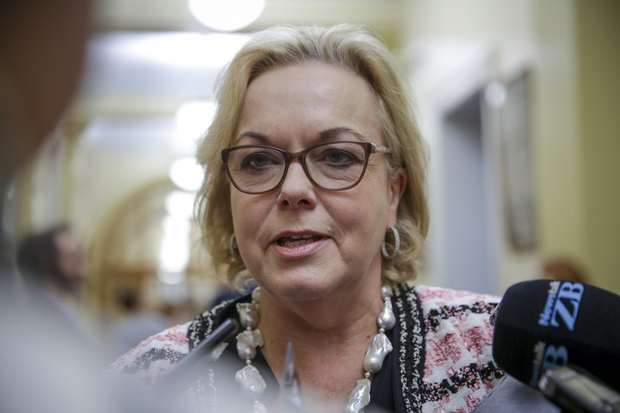 Mr Nui had three "serious charges" for assault but hadn't been violent since the 1980s, when he gave up alcohol, he said.

He had never been in prison but had spent two months in a juvenile detention facility as a teenager, he told Checkpoint.

Draft response in support of volunteer

Before Mr Nui was stood down, Corrections had prepared a media response stating it supported Mr Nui working in a voluntary capacity to support Māori prisoners.

The response was approved by a number of people in the department including acting deputy national commissioner Darius Fagan.

But, before the statement was released, Ms Collins publicly opposed Mr Nui's role and told Corrections to remove him.

It was understood that staff across the department sharply disagreed with Ms Collin's stance.

In a written statement this afternoon, Mr Smith said it was not unusual for his department to adjust its responses as more information came to light.

"On Wednesday 29 June 2016 we received a query from media about the suitability of gang member Ngapari Nui volunteering in prison. Early responses developed were drafted based on information available at that time.

"We then sought further information from Mr Nui about his links to the gang. On Friday Mr Nui confirmed his status as a patched member. On Monday we suspended his registration as a registered volunteer."

However, a Corrections source has told RNZ News the department always knew Mr Nui was a life member of Black Power, and that was the same thing as being patched.

"She's quite entitled as a minister to make her point known and her point is active gang members present a real risk, and her argument is [that] gangs are at the forefront of the manufacture and distribution of drugs and a lot of crime in New Zealand.

"Sure if you're an ex-member and want to do some good work in the prisons and others then that's to be welcomed, but [for] an active member there is always a risk the person recruits or does other things."

The programme that Mr Nui was involved in has been running for over 15 years and those involved are nominated by iwi groups to assist in reducing Māori offending.