Prime Minister John Key has been forced to defend the government's plan to deal with soaring house prices, while at the same time refusing to say there's a housing crisis. 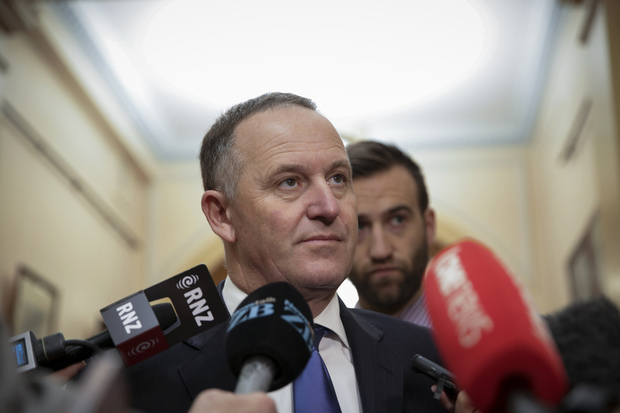 House prices are rising at their fastest pace since 2004, with the national average now $591,000.

During question time in Parliament this afternoon, Labour leader Andrew Little asked Mr Key whether he stood by his statement that there was no housing crisis in New Zealand.

"Yes, I am concerned about rising house prices. It's certainly one of our biggest challenges, and that's why the government has a comprehensive plan to deal with it."

Mr Key said lots of houses were being built in Auckland, but he conceded more were needed.

Earlier today, the prime minister said the Reserve Bank should "get on with it" if it aimed to cool the market by targeting housing investors through further lending ratios.

He said prices were rising more quickly than the government would like, and it had been in discussions with the central bank about a possible response, which could include further loan-to-value ratios aimed at residential property investors.

He said there was a risk of people buying up in anticipation of more limits being imposed, and if the bank intended to act, it should do so quickly.

"I think there is a responsibility for the Reserve Bank to have a look at the question around investors," Mr Key said.

"They can control that part of the market... certainly from the government's perspective I think it's been that having a look at that might make some sense."

Targeting investors could be a double-edged sword as they were necessary to provide properties for the rental market, the prime minister said.

"But my sense is that potentially one of the risks is that you have got people buying rental properties at the moment, borrowing more money, but fearful the Reserve Bank's going to move.

"So if they're going to make changes, probably they should get on with it."

Earlier this week, former Reserve Bank chair Arthur Grimes said prices in Auckland needed to come down by 40 percent, and suggested local and central government should act deliberately to crash them.

Meanwhile, Auckland deputy mayor Penny Hulse called for an end to the politics informing the housing debate and a move towards a cross-party agreement to tackle the crisis.

A comprehensive plan for housing was needed from government, she said.

"It would be a coherent plan that brings together Minister [Paula] Bennett, Minister [Bill] English and Minister [Nick] Smith; the three ministries working collaboratively on all issues to do with housing."

At the moment, Auckland Council sometimes got different messages from different ministries, she said.

Soaring house prices in Auckland was locking a generation out of ownership, including her own two children, Ms Hulse said.

The fact that many non-home owners would be forced to leave the city was something that weighed on her every hour, she said.

"This about our children, our grandchildren, being able to afford to stay in the Auckland we love."

Latest data from QV put the share of sales in Auckland to investors at 46 percent of all sales, up from 37 percent in 2012.

"Nationwide values are now rising at the fastest rate since 2004, up 5.6 percent over the past three months alone," QV national spokesperson Andrea Rush said.

"The Reserve Bank is considering introducing further restrictions on property investors and it appears this may have led to a surge in investor purchases in various housing markets around the country over the past month," Ms Rush said.

The national average of 13.5 percent growth in the year to June compared with a rise in values of 12.4 percent over the 12 months to May.