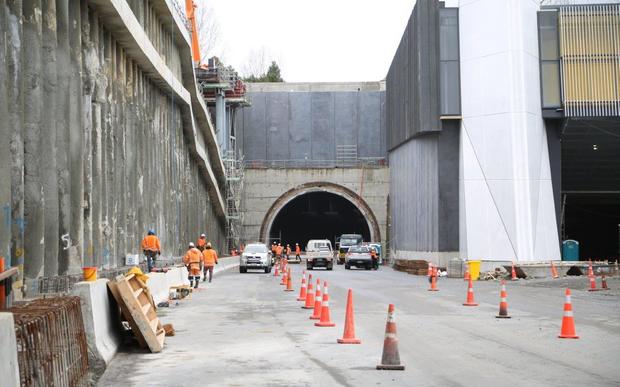 One of twin 2.4km tunnels being constructed as part of the Waterview connection. Photo: RNZ / Tom Furley

The road project is the country's biggest, at $1.4 billion, and includes the country's longest road tunnel, which is also the world's 10th largest in diameter.

Only half of the required New Zealand standard was specified when hundreds of tonnes of multistrand steel wire used in the project was ordered from a factory in China that was not audited by Australasian certifiers.

The New Zealand Transport Agency (NZTA) said it was "confident in the quality and safety" of the pre-stressing seven-strand steel wire, and that none of it had failed at Waterview.

But it would not explain to RNZ News why only the first part of the standard AS/NZS4672 was specified when the product (PT strand) was ordered, and not the second part, which lays out a rigourous testing regime.

The strand, which gives concrete all its tensile strength, has been used in the Waterview tunnel and the project's bridges and ramps.

Ossen is not certified by the Australasian Certification Authority for Reinforcing Steel and Structural Steels (ACRS).

Mr Bridges said he had sought assurances from NZTA that the steel was OK.

The transport agency said the strand passed tests by a top lab, SGS, and that none of it had failed at Waterview.