Hundreds of tonnes of steel that does not meet the New Zealand standard has been used to build the huge Waterview highway and tunnel in Auckland. 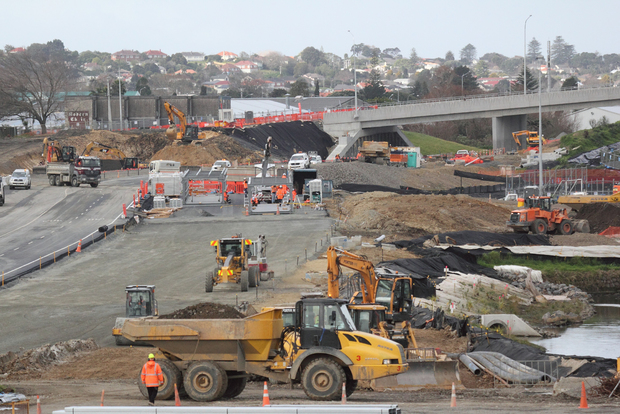 The Transport Agency says it is "confident in the quality and safety" of the pre-stressing, seven-strand steel wire.

But it would not explain to RNZ News why only the first part of the standard AS/NZS4672 was specified when the product (PT strand) was ordered, and not the second part, which lays out a rigorous testing regime.

The strand gives concrete all its tensile strength and is in the Waterview tunnel, bridges and ramps.

Ossen is not certified by the Australasian Certification Authority for Reinforcing Steel and Structural Steels (ACRS).

Easysteel brought the steel in via an Australian trading company, CMC, that is not approved to provide strand for Australia's main roads.

The Transport Agency said the Waterview strand had passed tests by top lab, SGS, and none had failed.

RNZ News began investigating the strand following our exposure of failed steel at the Huntly Bypass on the Waikato Expressway, which had wrong test certificates and was too brittle.

The Transport Agency, asked on Friday about the strand, last night put out a statement saying the "strand was specified to the required New Zealand standard."

But it then went on to talk only and repeatedly about part 1 of the standard and not part 2, which was added in 2007 to toughen up on testing.

Part 2 lays out when, and how much, testing must be done and by whom; for example, it demands an annual base test that involves stretching some of the strand for 1000 hours.

The standard also spells out that using part 2 of the standard is necessary to "ensure compliance" with part 1.

RNZ News is continuing to ask the Transport Agency to clarify why only part 1 was specified.

The main contractor at Waterview, Fletcher Construction, which is the country's biggest builder, and the strand's importer Easysteel have not replied to our questions.

The Transport Agency said samples of the strand were taken by a top lab, SGS New Zealand, which sent them to SGS Taiwan, as there is no equipment in this country to test strand. It passed these tests.

The Transport Agency in its statement then details at length how the strand was installed at Waterview using a hydraulic jack to put huge tension on it.

A gauge measures how much it stretches, which is checked against the steel mill's test certificate results.

"If the 'gauge pressure' and elongation do not correspond with the project's calculation based on the mill certificate parameters, a problem would be very obvious at that point - the strand would either "snap or stretch too far," the Transport Agency said.

"There were no problems recorded in the stressing phases, and at no point did any strands fail during this stressing process."

However, the process of getting SGS to test the strand and then having it installed, is not what the full standard requires.

Questions have been raised too, about the steel supply chain.

Easysteel won the strand contract over of other local suppliers, at least two of which get strand from manufacturers who are approved under Queensland's very tight controls on main roads steel supply, and who are also certified by ACRS.

Instead, Easysteel got the steel from Ossen Innovation Materials in China, which is not ACRS certified, via CMC. CMC does not supply strand to main roads projects in Australia, as approved importers there must demonstrate they manage the quality of the strand from the steel mill on through the process.

Ossen is listed on the US Nasdaq exchange but it is small, worth perhaps $US12-16m.

None of a half-dozen strand suppliers in Australasia that RNZ News talked to had dealt with Ossen, and only one had heard of it.

Ossen does appear to be certified to supply strand to South Korea. It said it had supplied big bridges and highway projects in China, and exported to Australasia, Japan, Bangladesh and Costa Rica.

However, we also obtained from Ossen two other test certificates from a third-party testing lab it uses in Shanghai, which relate to other strand. These appear to be missing the coil number, which is crucial for tracing it back if there is a problem. It also appears stress relaxation testing had been done at 70 percent when the 4267 Standard required 80 percent.

The Shanghai lab says on the certificate that the steel meets the standard; but it does not because the test is wrong.