Prime Minister John Key says he and his Fijian counterpart will have to agree to disagree on Fiji's blacklisting of some New Zealand journalists. 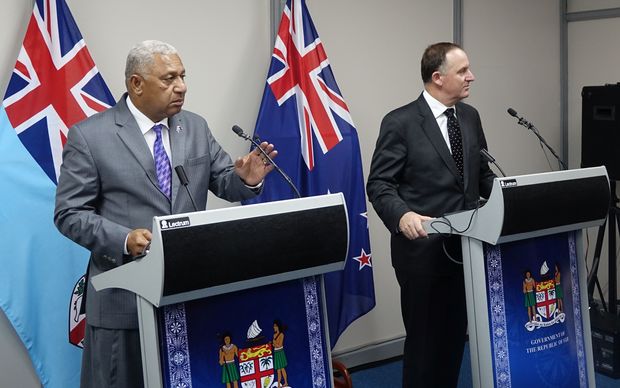 "Certain journalists in New Zealand and Australia and certain journalists in Fiji think nothing of dispensing with the facts if they get in the way of the politically-motivated narrative they want to tell and we are saying to the news organisations that employ them send someone else." 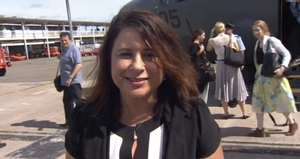 Mr Key said he raised the issue with Mr Bainimarmama immediately after the function, and again this morning during their formal talks.

But he said they simply did not see eye to eye on the issue.

"He takes on board what we're saying, but he believes that the ban for those particular journalists should be there - I don't agree with that."

Mr Key said being challenged by the media and opposition politicians was an important part of democracy.

Following his formal meeting in Suva this morning, Mr Key said he wanted to build a better relationship than the one which was strained following Mr Bainimarama's 2006 coup.

"This is an important step in the relationship, as I said to the Prime Minister, I didn't come to Fiji to relitigate the issues of the last 10 years," Mr Key said.

Mr Bainimarama described their meeting as fruitful and a solid foundation for improving relations.

"And we have begun the process of rebuilding and redefining our relationship and we have a much better understanding of our respective positions." 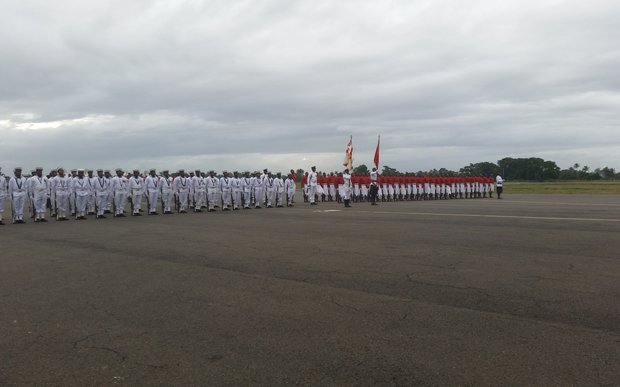 A 100-strong guard of honour for John Key Photo: RNZ / Sally Round

Suva pulled out all stops to welcome Mr Key yesterday, who is the first New Zealand prime minister to visit Fiji in a decade.

A 100-strong Guard of Honour, waving schoolchildren and a massive roadside billboard featuring the New Zealand leader marked the end of chilly relations since Mr Bainimarama's coup of 2006.

Mr Bainimarama's FijiFirst party was elected to power in 2014, leading to the full restoration of diplomatic links between the two countries, but top-level talks have taken longer to ensue.

Mr Key said the main aim of his visit was to reset the relationship.

At a traditional welcome ceremony Mr Key was offered a bowl of kava and presented with a tabua or whale tooth and pig. 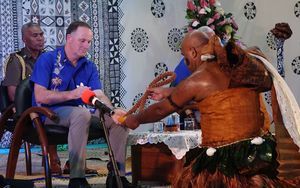 John Key receives the tabua - a whale tooth - during the welcoming ceremony. Photo: RNZI/ Sally Round

Friday's official talks he said would cover a range of issues including trade and investment and recovery after February's devastating cyclone.

"The personal chemistry seems very strong," he said "I think they are genuinely very grateful for the work we have been doing for Cyclone Winston. This is a very deep relationship."

"It will be great to have the prime minister back at the Forum. I think the Forum prime ministers would like to see that. At every other level now, Fiji's fully engaged so it's really the last step that needs to be taken. We can't force them to do that but we can actively encourage them and we'd support that."

At a banquet to honour Mr Key on Thursday night, Mr Bainimarama said he intended to work with the New Zealand leader to strengthen and redefine the relationship. 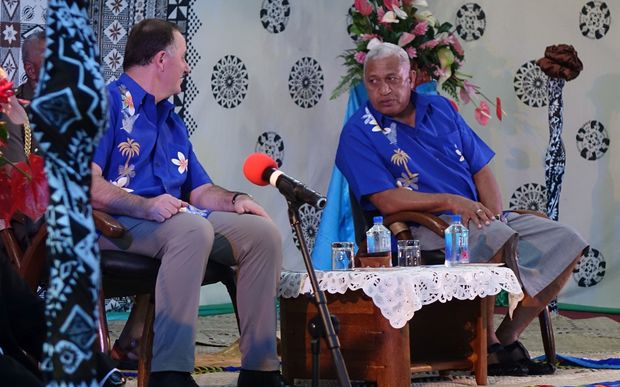 Much of his welcome speech was devoted to defending his ousting of the government of Laisenia Qarase in 2006 and his administration's efforts since to bring equality to all in Fiji and stamp out corruption.

"There appears to be a substantial body of opinion in New Zealand by a generally hostile media that what has happened in Fiji somehow lacks legitimacy, that somehow I lack legitimacy and that my government lacks legitimacy. This is simply not borne out by the facts."

He said he looked forward to a more collaborative and mutually respectful relationship with New Zealand.

"The strains and irritants that have marked our political relationship in recent years are a textbook lesson on how not to conduct friendly relations between neighbouring countries. They must be replaced by genuine co-operation and understanding."

Mr Key and Mr Bainimarama are due to meet for official talks on Friday morning.