Labour leader Andrew Little has told the Green's AGM the two parties have to prove they are a credible alternative to the National-led Government. 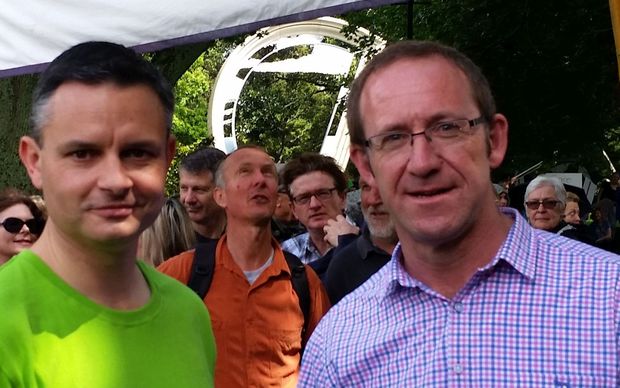 It is the first time a Labour leader has spoken at a Green Party AGM, and comes just days after the two parties signed a Memorandum of Understanding to work together up until the election in an effort to oust the government.

Mr Little received a standing ovation and prolonged applause at the conference in Christchurch, with Green Party co-leader James Shaw saying Mr Little's presence at the AGM was a "break in the clouds".

"You are someone who brings people together. And you don't shy away from trying to tackle the really difficult challenges. That's why I want to work with you," Mr Shaw said.

Mr Little told the AGM the government had lost touch with people on issues like housing, health, and poverty and people wanted leaders that would stand up for them.

"The leadership I bring to the next progressive government will deliver a better future for our country.

"The government I lead will operate under the principle that the economy is not an end in itself, but a means to the end of delivering a good and decent life to our people," he said.

The government lacked ambition on climate change environmental protection, and Labour and the Greens shared a vision for a stronger, fairer New Zealand, he said.

It was necessary to strengthen the relationship between the two parties so that voters could see they were ready for the responsibility of government, Mr Little said.

Is his address to the members, Mr Shaw said the party was entering campaign mode and the Labour-Green partnership offered a crystal clear alternative to the current government.

"When New Zealand elects the first Labour-Green government in 18 months, this is the moment we will remember.

"My hope is that with the first Labour-Green government we'll find ourselves again," he said.

Mr Shaw rejected any plans of working with National.

"We've seen no evidence that National are willing or able to tackle the big challenges," he said.

"They have dealt with the superficial, they have allowed and encouraged the big structural problems to grow - they have simply plastered over the cracks."

This was a year of change and renewal for the Green Party and the real momentum to oust the current government has only just begun, Mr Shaw said.