Labour and Green parties have announced an agreement to work together to change the government.

The two parties have signed a Memorandum of Understanding (MoU) - the first time they have formalised their relationship.

Read the MoU between Labour and Greens (PDF, 1.6MB)

It's been a long time coming for the Green Party who have held out for a formal agreement with Labour for many years.

Labour leader Andrew Little said the two parties wanted to offer New Zealanders a viable alternative to the National-led government, ahead of the 2017 General Election.

He said the MoU would last only until the election, and coalitions would be discussed only after that.

"In the end the voters will decide, and it will be after the voters have spoken that we will then be in a position to look at how a government is formed."

Mr Little was asked repeatedly what this deal meant for any kind of post-election agreement with New Zealand First.

He said anyone else was welcome to join.

"We are both agreed that this is not a monogamous relationship, it's politics and it's MMP, but we are determined to work together, to achieve a change of government and a government that offers a genuinely progressive programme and we welcome any other party that will join with us for those two objectives."

Green Party co-leader Metiria Turei said the relationship between her party and New Zealand First leader Winston Peters had improved since 2005 when Helen Clark spurned the Greens for a deal with New Zealand First. 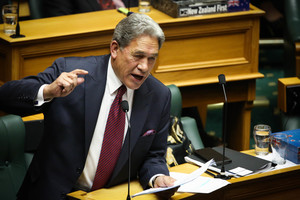 "We've worked well with Winston Peters in the past, those issues that you are talking about, those are 10 years old, this is a new time, we have new leadership, we are well beyond those days."

The two parties will work together on some policy and campaigns and they will also consider ways to cooperate at the 2016 local body elections.

The MoU stated that the two parties would have a "no surprises" policy which meant they give each other prior notice and the detail of major announcements and speeches.

Ms Turei said they would still be able to criticise each other, and would have their own distinct manifestos going into next year's election.

The MoU only lasts until the election, so it does not take the shape of a formal coalition or a confidence and supply agreement.

Labour and the Greens are the parties of change.#ChangeTheGovt pic.twitter.com/x7IOWcTlwl

Labour hand the Greens a rose. Does that make Winston Naz?