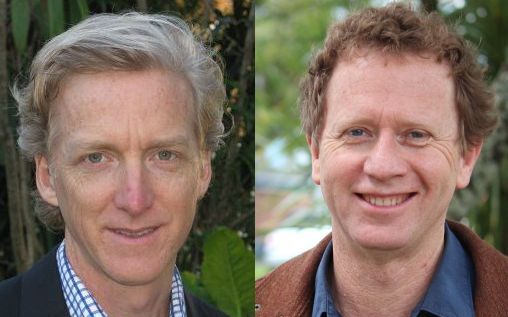 Amnesty International's Bayldon (left) and Russel Norman of Greenpeace, who says the PM's comments on trusts were wrong. Photo: SUPPLIED

During loud exchanges in Parliament yesterday, Mr Key said Greenpeace, Amnesty and the Red Cross featured in the Panama Papers.

The organisations are mentioned a searchable database released yesterday by the International Consortium of Investigative Journalists.

The Panama Papers are an unprecedented leak of 11.5 million files from the database of Mossack Fonseca, the world's fourth-biggest offshore law firm.

Foreign trusts and New Zealand's rules have been under scrutiny since the release of the papers, which revealed how Mossack Fonseca orchestrated a worldwide web of companies to let people hide money and avoid taxes.

An investigation into the papers by RNZ, TVNZ and investigative journalist Nicky Hager has shown New Zealand is being used by foreigners to organise their private wealth, business affairs and channel their funds around the world.

Mr Key went on the front foot over the Panama Papers in Parliament yesterday, armed with the IRD's initial analysis of the documents, but Mr Norman said the Prime Minister "fell on his face".

"Because he was factually incorrect. He got it wrong, and I suggest the prime minister apologise."

Mr Norman said while Greenpeace was listed in the database that kept the Panama Papers information, it was part of a separate data set from another release of documents several years ago.

He said the mention of charities in that data release had been found to be a common scam, where people who were trying to avoid tax would use a charity to try and cover up their tracks.

The prime minister should have known more about the facts, said Mr Norman.

"When you're the prime minister of New Zealand and you have basically unlimited research capacity and then you look into this database and there are two data sets in there - one of them is the Panama Papers, another one is an entirely separate one - it seems to me that you are responsible for making sure the comments you make are accurate.

"What the prime minister said was not true, it was inaccurate. We are not in the Panama Papers. There may well be many instances where charities, for example, were basically being used by scammers, but all the prime minister is doing is revictimising the charities but saying that somehow, they are caught up in this corrupt thing, and they're not."

Mr Norman said the prime minister needed to stop flinging around blame and should actually address the issue of foreign trusts.

Mr Bayldon said it was a known fact that trusts listed charities as beneficiaries, so the real owners could avoid scrutiny by tax authorities, and charities were not aware when their names were used in this way.

He said Amnesty had no knowledge of any real links with foreign trusts and he was disappointed Mr Key would insinuate otherwise.

"Questions of the prime minister's motivations probably need to be put to him," he said.

However, he backed up Mr Norman's comments that the data Mr Key had quoted was a scam where charities' names were used to avoid paying tax.

"Our message is simply that it is just something that people are going overseas to use our good name, our much-loved name and we want to assure people there is no link between either New Zealand Red Cross or International Red Cross and these trusts."

He said the Red Cross was one of the most recognised, most trusted, symbols in the world and it worked hard to keep it that way.

"This is typical of the way the prime minister deals with issues like this. He's attempting to divert and diminish the issue," he said.

"It's not just Greenpeace and Amnesty and the Red Cross, the All Blacks have been used in the same way.

"It is a ridiculous thing for the prime minister, who I'm sure knew that this was part of a scam, to throw that into the debate," Mr Robertson said.

Mr Key's office said he was "simply making the point that just because someone is named on the database does not mean they have done anything wrong, and that people should be wary of drawing conclusions based on the data released."