An Auckland Council bylaw on a campaign billboard might raise questions of freedom of speech, two electoral law specialists say. 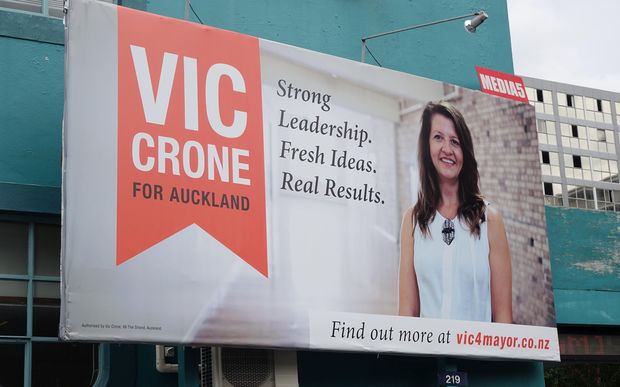 The council has told mayoral candidate Victoria Crone that several of her billboards on private commercial sites breach the city's bylaw.

The billboards, on Hobson Street in Auckland's CBD, St Georges Bay Road, The Strand in Parnell and one in Orewa, have been deemed election signs by council electoral staff.

Private sites used to be unregulated but, two years ago, council agency Auckland Transport tightened its bylaw on election signs.

Commercial and private sites became covered by the same nine-week campaign advertising restriction that traditionally applied only to hoardings on public land.

The earliest an election sign is allowed to be displayed is 6 August.

Auckland Council manager democracy services Marguerite Delbet contacted Ms Crone by phone and explained the requirements of the bylaw and how the period for display applied to all election signs, including commercial billboards. 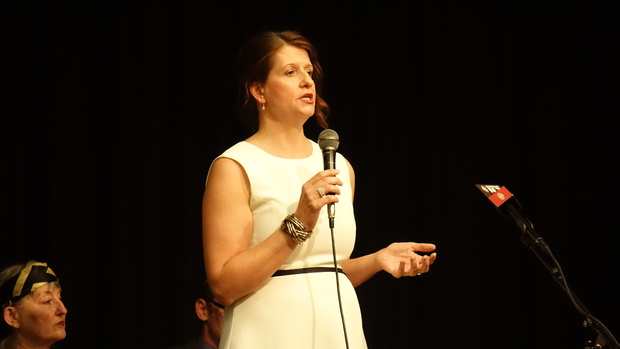 The council said Ms Crone must either remove the signs or alter them.

Ms Crone said she was challenging the council's interpretation of the bylaw.

"What we don't understand is that on a private billboard that everybody in the commercial world uses, such as Heineken, why are my signs any different?" she said.

"Political freedom of speech is one of the most important types of speech, so when you're looking at measures that limit it, you've got to think about whether there's some proportionate objective that's just as important," he said.

Otago University professor of public law Andrew Geddis described the reasoning used by Auckland Transport to decide the bylaw complied with the Bill of Rights as "threadbare".

"Councils, because they are subject to the Bill of Rights, can't use bylaws to restrict freedom of expression, unless they can show that limit is demonstrably justified in a free and democratic society," he said.

"It's up to the council to show there's a good reason, and the reason given here just doesn't seem to work."

Professor Geddis said the only way to challenge the bylaw would be before the High Court, which meant that it probably couldn't be changed before October's election.

Auckland Transport's rationale for the change, which was decided by a hearings panel, was that different rules for different types of land led to confusion, and avoided private sites "leading to unnecessary visual distraction".

Auckland Council, which enforces the bylaw, said it had no intention to take the signs down, and was trying to resolve the situation with Ms Crone.

The Auckland Transport Election Signs Bylaw 2013 limits the display of election signs to the period nine weeks prior to 8 October 2016 - election day.

In an earlier statement, Ms Crone said she disagreed with the council's interpretation and was seeking further advice.

"If only [the] council was as focused on cutting waste and getting their spending under control as they are on my campaign.

"The Orewa sign was for a public meeting with the local community and it's incredibly disappointing that council's wasting time and resources trying to restrict candidates from engaging with local communities."