The Prime Minister has rejected suggestions he broke a long-standing promise by refusing to go to Waitangi this year. 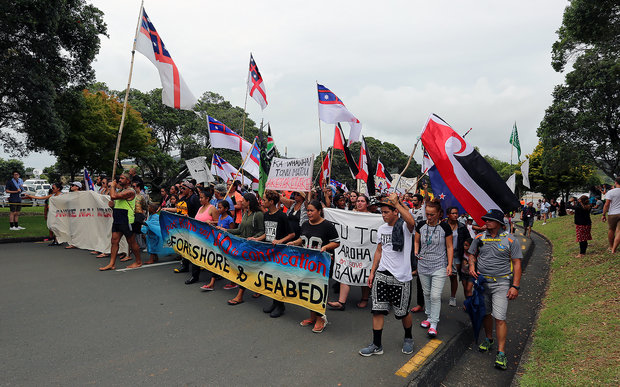 As opposition leader in 2007, John Key went to Waitangi while then Prime Minister Helen Clark stayed away. He said if he became Prime Minister, he would go every year.

But he told Morning Report today he did not think he broke his word by deciding not to make his annual visit to Te Tii marae last Thursday.

He said he would only go under "conditions of equity and fairness".

"You wouldn't go there if you can't speak. You have to ask the obvious question - why don't some of those people want us to speak? And the answer is, I think, because they know that their arguments don't stack up and they know when the government gets up and says 'you argued that this is bad for Maori, but the Treaty is completely excluded and the only benefits are positive benefits'. They know that undercuts their argument.

"Why on earth would they send my office a letter that contradicts the one they sent the day before. And it's not as simple as saying 'well, you broke a promise', because they said if I come up there, Kingi started saying there would be hell to pay, there would be trouble and I'll be encouraging that trouble.

He said it was a "ridiculous scenario".

"You can't have a situation where politicians go to the lower marae - like we do go to marae all around the country, as part of the ongoing engagement around the Treaty, where there is an exchange of dialogue and views - and not be allowed to have that perspective."

Mr Key said he was uncertain whether he would go to Te Tii Marae next year, saying some members of Ngapuhi had suggested political speeches might be better made at the marae on the Treaty of Waitangi grounds.

But Labour leader Andrew Little - who has pledged to attend every year if he becomes Prime Minister - said it was right that the head of government should commemorate and celebrate the birth of the nation on Waitangi Day.

Mr Little said Mr Key was mucked around about his attendance on the lower marae on Friday.

"I fully understand why he, in frustration, said he would not bother going there. But in my view, he should have been there for the dawn service. That 's a time when we do genuinely commemorate, and celebrate and reflect, and there is a bit of time to go out on the Treaty grounds and talk to New Zealanders who have turned up there for it."

Mr Little said whatever happened the day before Waitangi, the country's Prime Minister should always attend on Waitangi Day itself.

Former Northland-based Labour MP Shane Jones said Waitangi's welcome ceremony was being held hostage by the trustees of one marae, who had no mandate from other Maori in their decisions.

Mr Jones told Morning Report the lower marae had turned into a fools' paradise and said the powhiri for political leaders could be moved from Te Tii marae to the Treaty grounds.

Despite staying away from Waitangi, Mr Key said the government still had a strong relationship with Maori.

He said much of the opposition to the government at Waitangi's Te Tii Marae was driven by a group of people opposed to the Trans-Pacific Partnership and by some who had been misled.

But he told Morning Report there was still a positive relationship with Maori.

"If you look at, for instance, the Treaty settlements, they've been going at a record rate. If you look at the amount of resources we've been putting into Maori and the improvements we've been getting in everything from education to health have been dramatically positive."

Mr Key also dismissed the claim that opposition to the Trans-Pacific Partnership agreement prompted him to cancel his annual trip to Waitangi.

He told Morning Report the opposition was not widespread.