The Māori Party is warning it will withdraw its support for proposed changes to the Resource Management Act (RMA) if the government backtracks on its promises.

Māori Party co-leader Marama Fox said the party was prepared to walk away from its support for the RMA if its conditions were not met. Photo: RNZ / Alexander Robertson

Last year, the party agreed to support the government's bill if Māori were given more say over how resources were managed.

New Zealand First leader Winston Peters said on Tuesday the government's concessions to the Māori Party were racist and should be thrown out.

Mr Peters argued the bill in its current form would take the country down a separatism track.

He singled out a clause in the bill that would require councils to hold discussions and form agreements with local iwi on the management of natural resources, including in freshwater management plans.

He said he would move amendments to remove that clause, and any references to the principles of the Treaty of Waitangi, from the final legislation.

When asked if he would consider that, Prime Minister John Key did not rule it out.

"What we need is 61-plus votes to get that out of select committee. We're happy to work with any political party to make that happen." 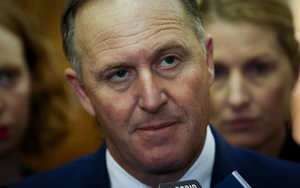 That would include New Zealand First and Mr Peters, Mr Key said.

"If he wants to support the National government, come up with his own set of proposals for the RMA and vote for it, we're more than happy to sit down with him and do that."

Mr Peters said he was pleased the government had signalled it was ready to talk.

"Well, first of all it's an admission that their claim that we wouldn't talk to them and that we were being obstructive on this issue simply wasn't true.

"They have never ever emailed, phoned, or ever talked to any of my colleauges or myself on this very important issue. So, I'm pleased that's out of the way."

"I'm asking them to justify their racist legislation because I can tell you that the average Māori around this country is getting nothing out of the pathway that they are planning for Māori - just a certain elite in Māoridom are doing very well," he said.

"We have a guarantee from the [Prime] Minister that the things that we have negotiated will be in there, that he will continue to negotiate in good faith with the Māori Party," she said.

"If that's not the case, we will walk away."

The bill is the government's third attempt to get its second set of changes to the RMA across the line.