Treasury is forecasting a small government deficit of $400 million in 2016 due to the slowing economy and subdued inflation.

The forecast of a return to deficit follows a $414m surplus in the June financial year - the first in seven years. 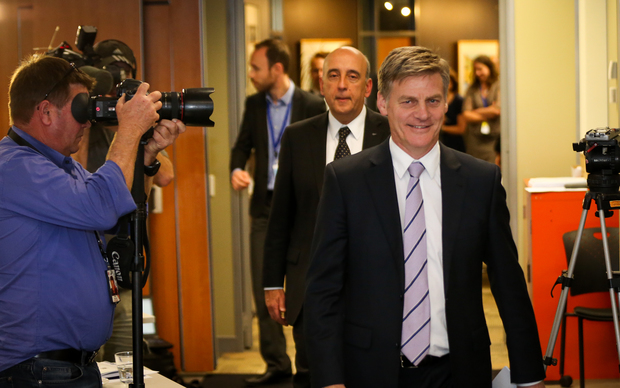 From right, Finance Minister Bill English and Secretary to the Treasury Gabriel Makhlouf at the Treasury in Wellington this afternoon. Photo: RNZ / Alexander Robertson

Finance Minister Bill English remained confident a surplus could be achieved, however, saying the figures released this afternoon were "just another Treasury forecast."

Treasury said the economy hit an unexpected soft patch in the first half of the year due to weaker growth in China and a slump in dairy prices which knocked confidence, will dampen growth and push up unemployment next year.

Mr English said the outlook for growth remained solid over the next five years, averaging 2.7 percent a year, with weaker growth over the next couple of years, and stronger activity in 2018 and 2019.

"The positive outlook for the economy over the next few years is driven by the Canterbury rebuild, supportive monetary policy, construction in Auckland, export growth supported by a lower dollar and migration."

Unemployment is projected to drop to 4.5 percent after peaking at 6.5 percent in March 2016.

Mr English said that was clearly higher than the government wanted to see.

"It's disappointing given the previous forecasts of continued decline in unemployment.

"The Reserve Bank has a peak of around 6.2 percent ... part of the reason [for] a higher unemployment rate is simply the large numbers of people turning up to the labour market - a labour market where there has been until recently pretty strong generation of new jobs."

Mr English said after reaching its surplus target, the government had tweaked its fiscal priorities.

"That does not signal a change in direction. We will continue to focus on keeping a tight rein on spending, running surpluses and paying down debt."

Mr English said new spending in the budget remained at $1bn in the 2016 budget, $2.5bn the year after, and $1.5bn in 2017, although some rephrasing between budgets was possible.

Mr English said the capital allowance had been increased by $1bn now that the Future Investment Fund had been fully allocated.

"Given the pipeline of high quality investment priorities, we consider it appropriate time to provide additional funding."

Economist at the Council of Trade Unions Bill Rosenberg said the government was irresponsible in not doing more to reduce child poverty and sharp rises in unemployment should be fixing growing social ills.

"We've got unemployment that is 20,000 higher than was forecast six months ago, we've got evident problems with child poverty, the health system is creaking, the housing situation needs desperate government action. We should be thinking about how we can spend more rather than worrying about fiddling around with deficits."