Thousands of people around the country have protested against the Trans Pacific Partnership trade deal. 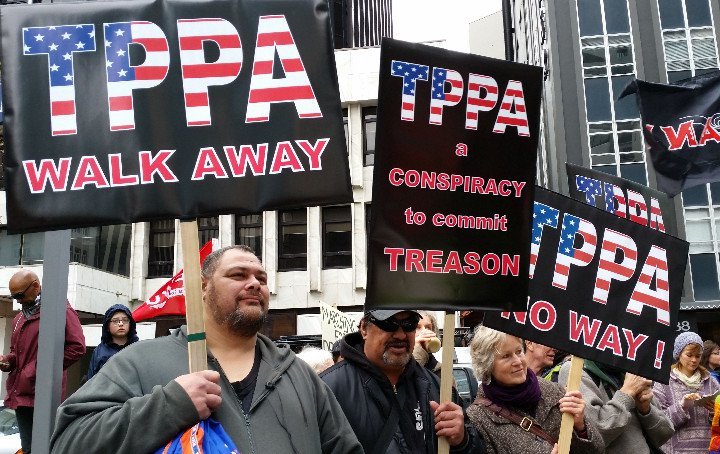 The crowd with anti-corporation slogans and signs in Wellington. 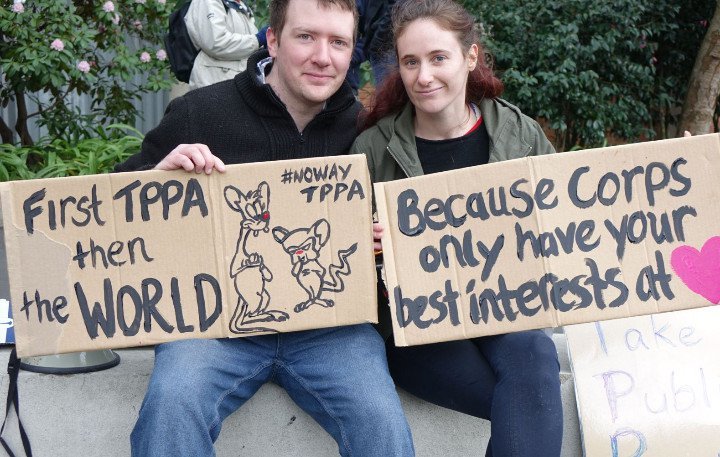 TPP protesters show off their signs. 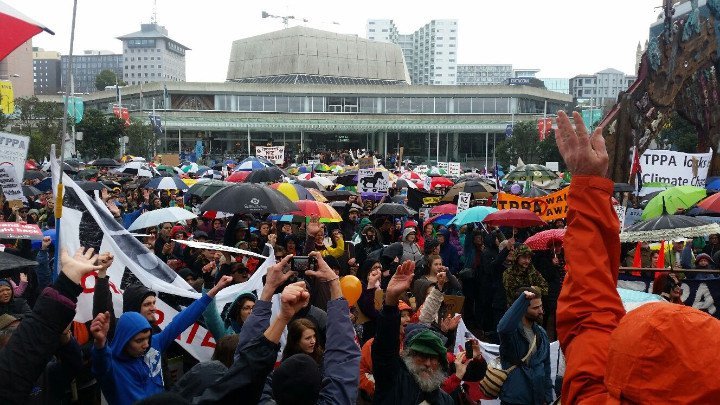 Arms up umbrellas up and chanting in the rain in Auckland. 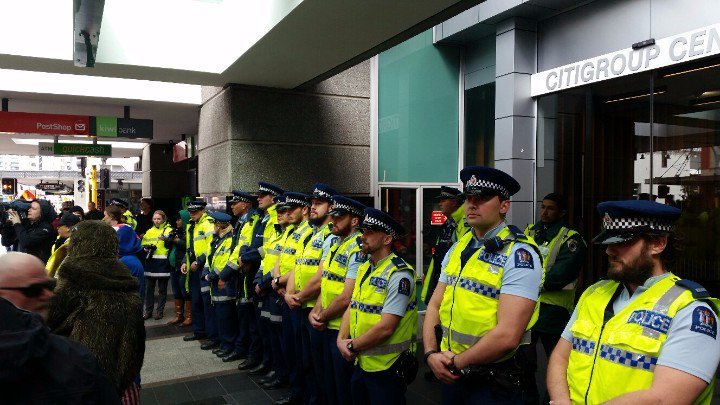 Guards and police move in to block protesters getting into the Beehive. 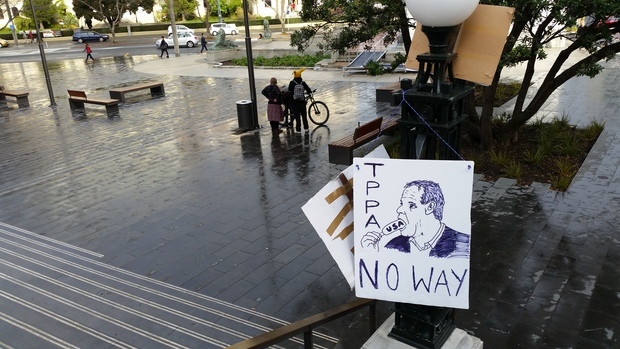 A protest sign left at the site of the Wellington anti-TPP rally. 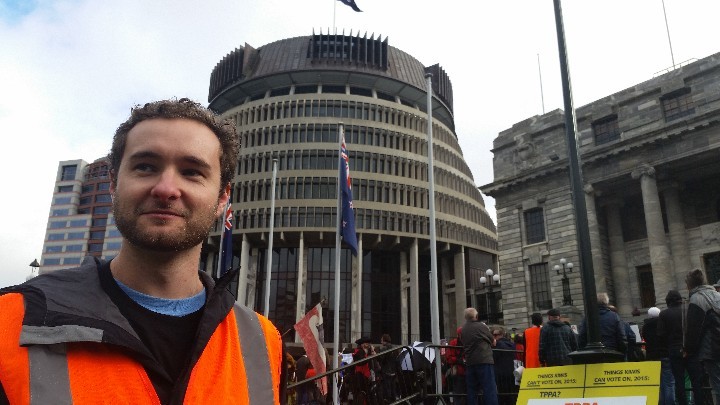 In Wellington It's Our Future spokesperson Edward Miller says today's message for the Government is to walk away from the TPP. 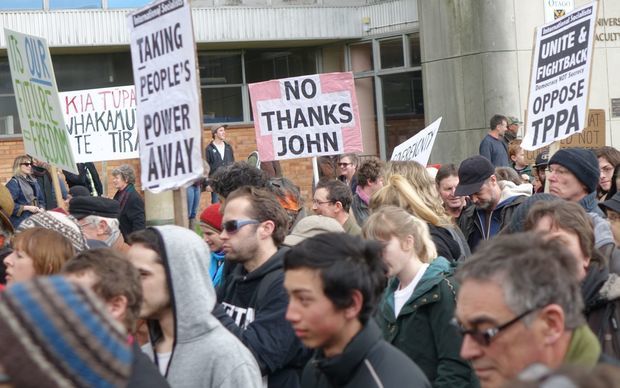 Protesters march in Dunedin against the TPP. 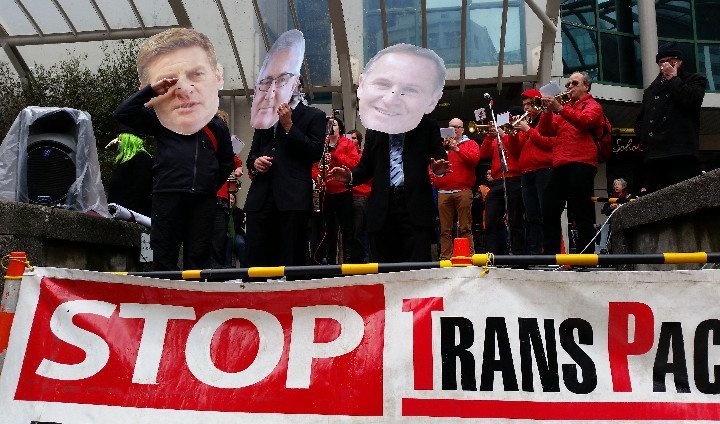 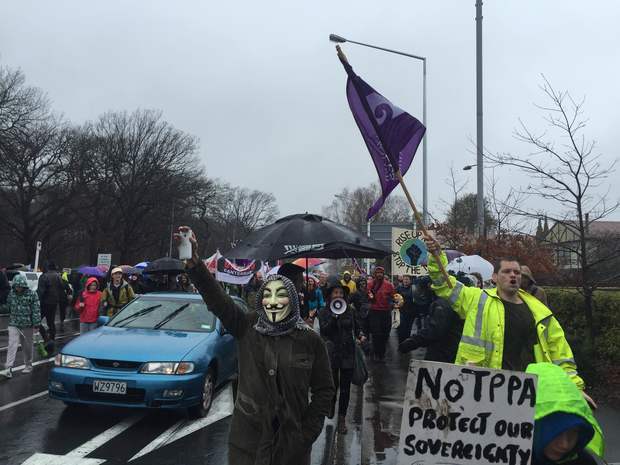 More than 1000 protesters march up Riccarton Road in Christchurch. 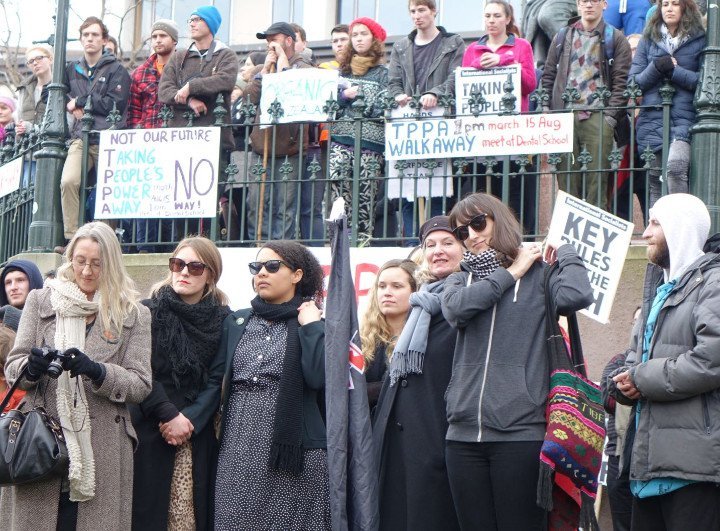 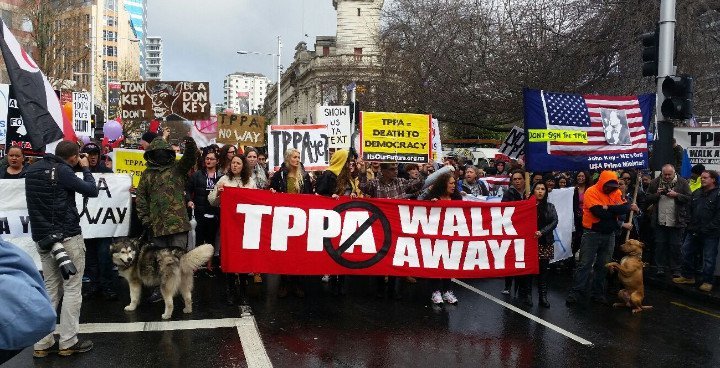 The Auckland crowd poised to march. 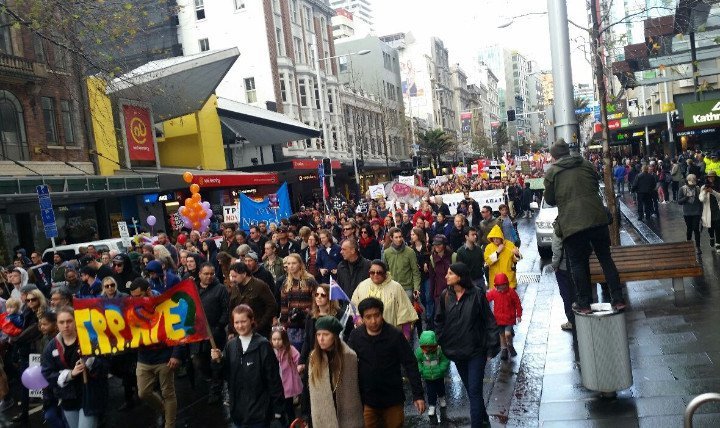 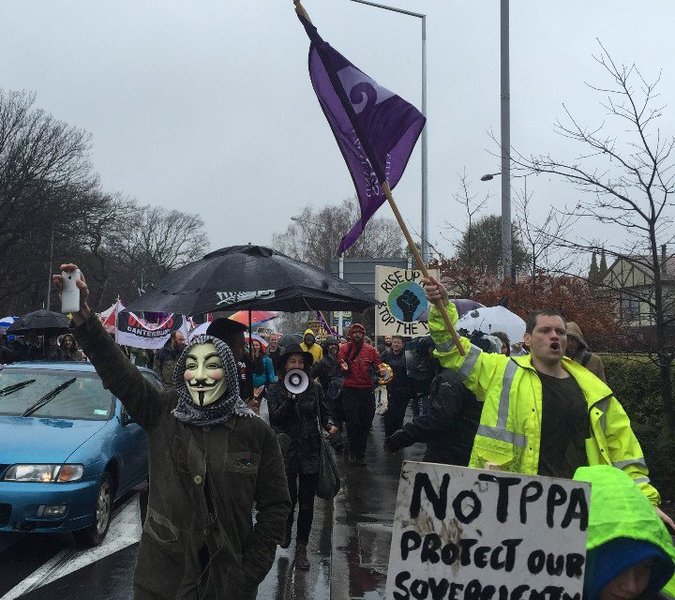 Protestors making their way up Riccarton Road in Christchurch. 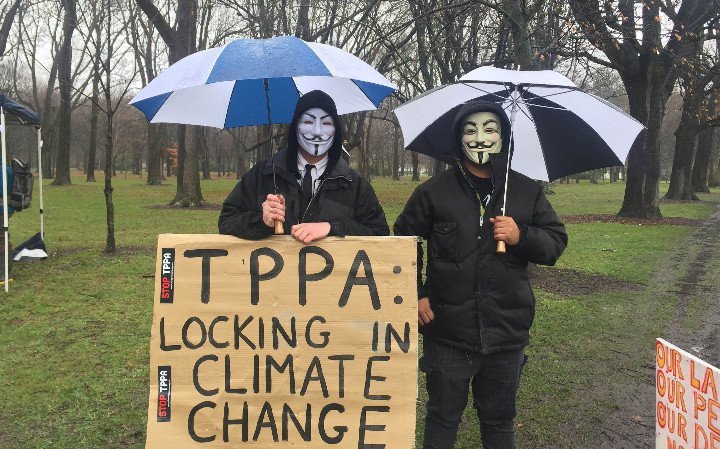 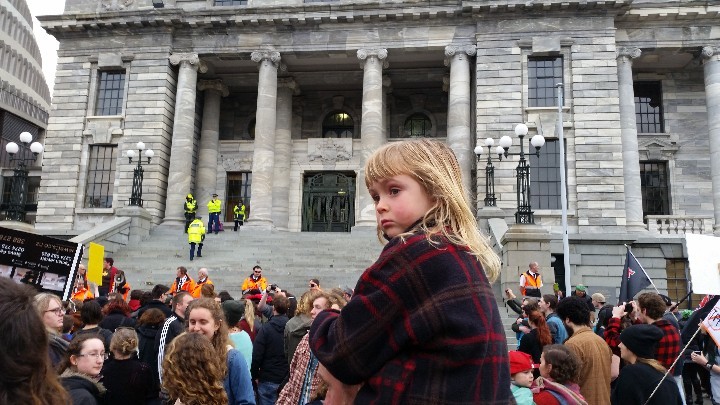 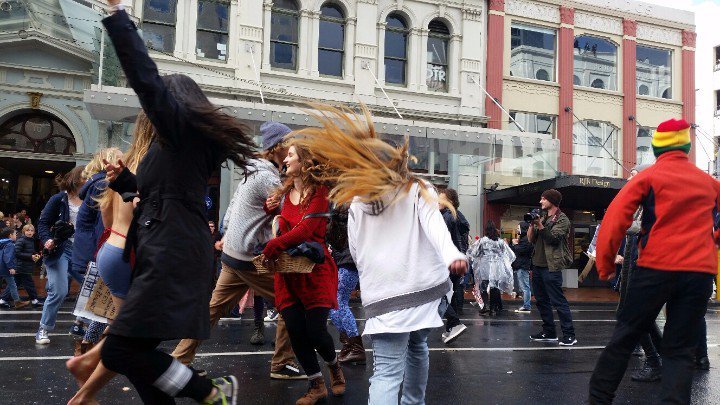 Some protesters stayed behind to dance in the middle of Auckland's Customs Street.

Protest rallies against New Zealand signing the TPP were held in 21 cities and towns.

In Auckland, about 2500 people listened to speakers against the TPP at Aotea Square before marching down Queen Street, where they gathered to chant outside the United States Consulate General at the Citigroup Centre. 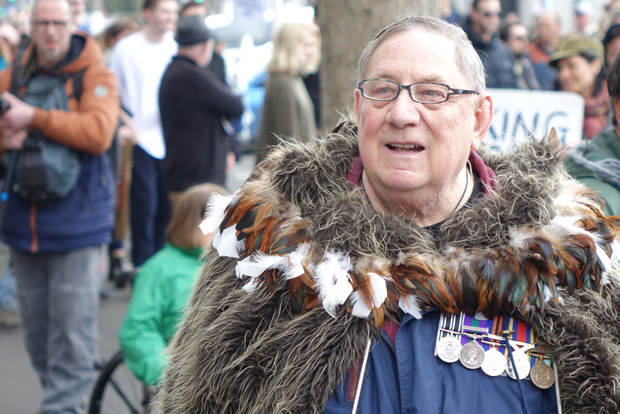 The US Consulate this week emailed American citizens urging them to avoid the march, saying even peaceful demonstrations could turn confrontational.

However, Auckland police said they were assured by the organisers that the rally would be family-oriented.

In central Wellington, traffic came to a standstill as 3,000 people marched from Midland Park on Parliament.

Some of the demonstrators briefly breached security at the Beehive entrance and were removed by security guards. 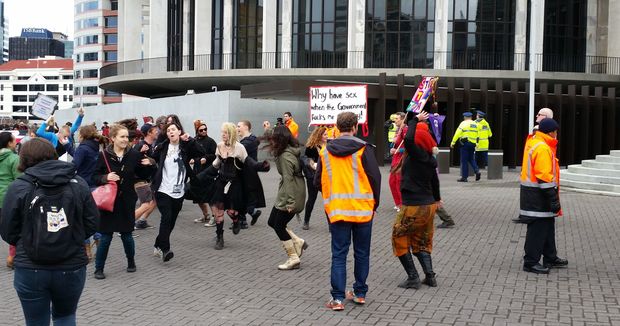 Guards and police move in to block protesters getting into the Beehive Photo: RNZ 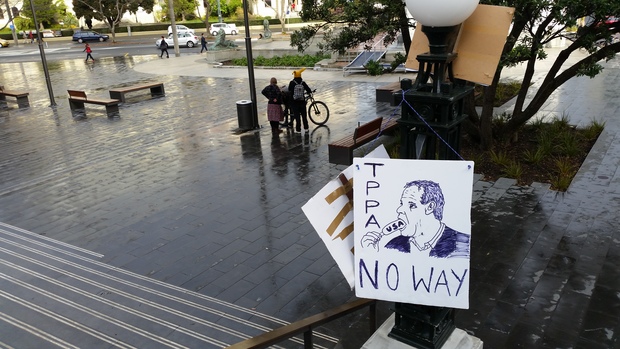 A protest sign left at the site of the Wellington anti-TPP rally. Photo: RNZ 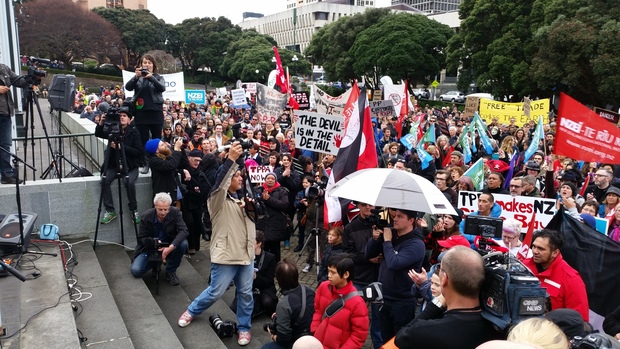 Wellington's protesters chant, clap and jeer on the steps of Parliament as guest speakers address the crowd Photo: RNZ 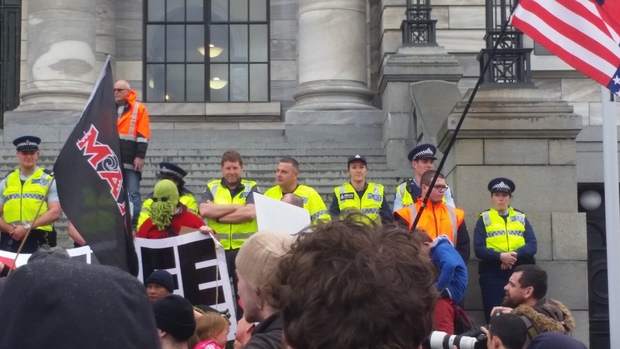 The police continue to hold their line at Parliament against the protesters Photo: RNZ

Rain in Christchurch didn't deter hundreds of protesters from gathering at Hagley Park where speakers condemned the TPP. 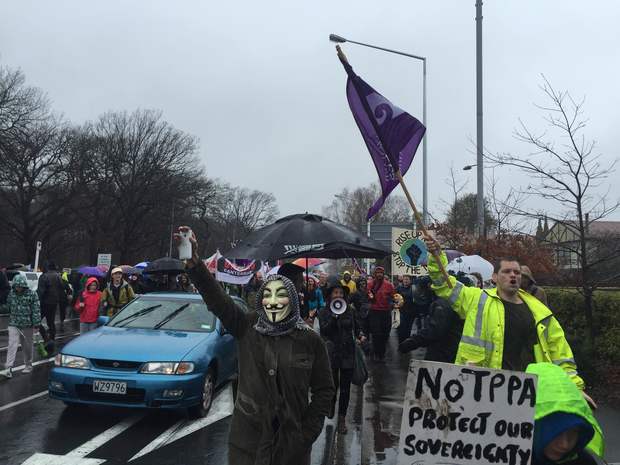 Before the march in Christchurch Donna Miles-Mojab told supporters this was not an ordinary protest, but the beginning of a movement.

Ms Miles-Mojab said today was a watershed moment in New Zealand's history and the TPP was not about free trade, but about protecting the interests of international corporations.

She said the Government was ignoring its citizens, who did not want the TPP to go ahead. 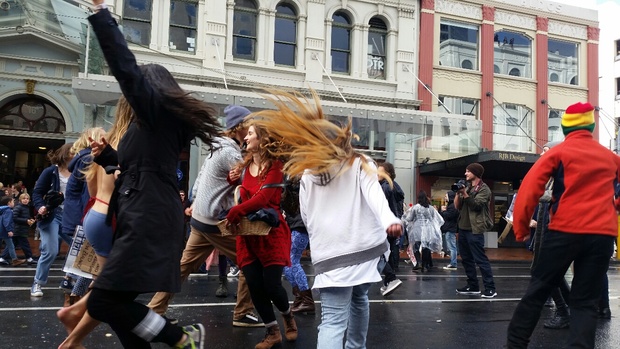 Some Auckland anti-TPP protesters stayed behind to dance in the middle of Customs Street. Photo: RNZ

In Dunedin, about 1500 people marched up the city's main strip, George Street, and filled the Upper Octagon for speeches and musical performances.

They heard speakers such as the Greens co-leader Metiria Turei talk about why they opposed the TPP. 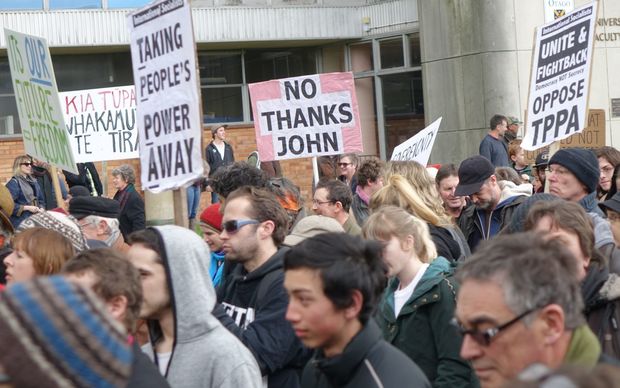 Protesters march in Dunedin against the TPP Photo: RNZ

An organiser of the anti-TPP protest there said the tide of public opinion was turning.

Jen Olsen said this was the fourth protest they had held, and was by the far the biggest.

Ms Olsen said the main message was to call for the Government to walk away from the multi-national trade deal, and she believed that could now happen.

"If the tide of political and public opinion turns against the TPP, the National Party are likely to think that this could be a very unpopular thing for them," she said. "Very unpopular come the next election, once people find out the consequences."

Ms Olsen said no-one who found out what the TPP was would think it was a good idea, except the one percent of the population who would benefit. 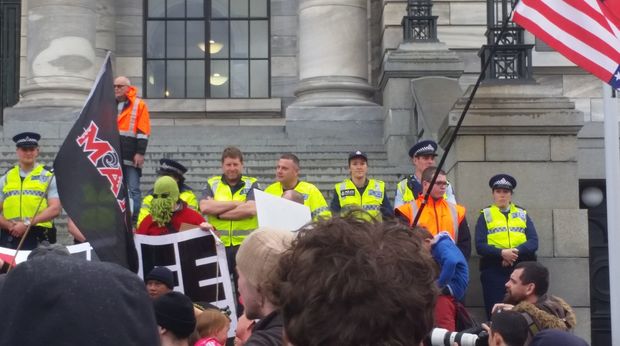 Police hold their line at Parliament against the protesters. Photo: RNZ

And a protester at the Dunedin anti-TPP rally called the trade deal a wolf in sheep's clothing.

Cameron Wood was holding a sign of a Kiwi in a hangman's noose.

He said the TPP would be a disaster for New Zealand.

"It's a wolf in sheep's clothing. And I think that is why there hasn't been any transparency around it, why they're happy to keep it secret up until the last minute, and why they don't - I believe - intend to give any of this information away," Mr Wood said.

"Because if they did, I think the majority of New Zealanders, no matter how they leaned or what they voted for, would turn around and say 'this is ridiculous, we're selling our future down the river."

Mr Wood said the Government must protect New Zealand's interests much better or walk away entirely. 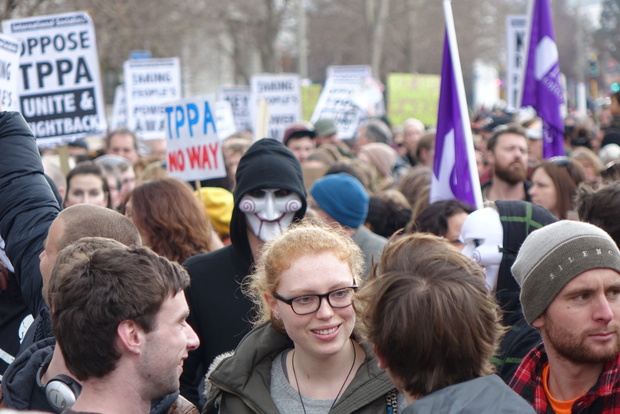 Protests were also held from Kaitaia to Invercargill.