Power Play - The Labour Party has gone boldly where plenty of other political parties have gone before, but at what cost? 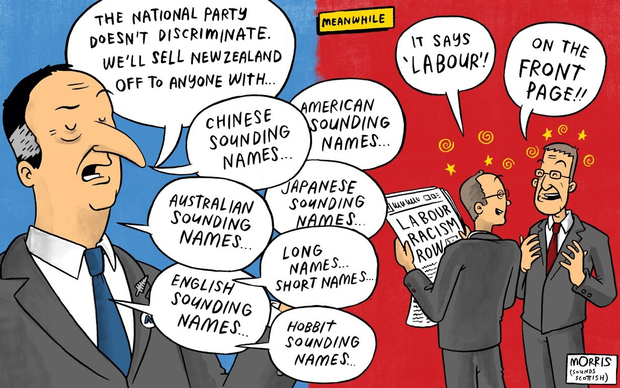 By releasing selective real estate data on Auckland house sales, Labour has certainly whipped up resentment about the spectre of hordes of Chinese investors driving up house prices to record levels.

But have the figures cast any light on what is undoubtedly a major problem in the Auckland housing market or been used to scapegoat one particular ethnic group for cynical political gain?

Labour's housing spokesperson Phil Twyford has stood by the party's claims, which are based on three months of data from Barfoot and Thompson. Photo: RNZ / Alexander Robertson

Out of the blocks, Labour's housing spokesperson Phil Twyford described the data as a "comprehensive sales record from a major Auckland real estate firm" - the latter may be true, but describing figures from a three-month period with no context or comparable timeframes as comprehensive is a stretch.

He continued to dress up the figures as having been "statistically modelled" to gauge the probability of the surnames on the list actually belonging to someone who was Chinese - Wang was 95 percent probable, whereas Lee was down to 40 percent.

The fact that 9 percent of the population in Auckland identify as Chinese, compared with nearly 40 percent of the houses having been bought by those with Chinese surnames, was then extrapolated to suggest the strong presence of overseas investors in the Auckland market.

None of this gets around the fact that what Labour ended up with was a list of names - Mr Twyford conceded they hadn't "door-knocked" these people to ascertain their personal circumstances, but confidently went on to talk about being able to reach a "very strong conclusion," which was "plain as day".

Again, a stretch, but assertions the public would be more likely to hear than the niceties of how the data was interpreted and presented by Labour.

Despite Mr Twyford's insistence his claims were backed by the data, his leader Andrew Little would later concede the figures were "crude," suggesting the statistical analysis Mr Twyford had offered up was not exactly robust.

For a party that has diligently and deliberately courted the ethnic vote, including the Chinese community in Auckland, this was a risky strategy - Mr Twyford's attempts to differentiate New Zealand Chinese from overseas investors would be lost in the rhetoric.

However, one point Labour took pains to highlight was the lack of government data on how much of the residential house market is owned by overseas investors.

The Government has scrambled to respond to ongoing questions about why it can't quantify foreign investment in the face of real concern about housing affordability and competition from overseas, and is passing a law requiring foreign buyers to have an IRD number and New Zealand bank account.

Even though that information will be collected from October, it only tracks the individual buyers in the New Zealand market, not the amount of real estate they are buying up.

Instead of being able to refute Labour's conclusions about the impact of foreign buyers because of the data vacuum, Economic Development Minister Steven Joyce was left to wield the accusation Labour was playing the race card.

That may be a valid claim but would have been stronger if it had been backed by solid data disproving Labour's assertions.

However, Mr Joyce has not been averse to playing the race card himself when it suits - he was the National Party's campaign manager when then-leader Don Brash ran the infamous Iwi/Kiwi election campaign in 2005.

In the same way Maori felt the political rhetoric hardened the attitude of many New Zealanders against them at that time, so may New Zealand Chinese feel the effects of Labour's recent approach.

The danger with political campaigns directed against a visibly identifiable ethnic sector of New Zealand is that individual Maori, or Chinese, can become the target of harassment or abuse even if they have nothing to do with the issue in question.

The Labour Party now has to ask itself whether the pay-off for its own political purposes is worth stirring up xenophobia that already exists in New Zealand, which has been given voice by the main opposition party.