The Government is delaying releasing information about its dealings with the wealthy Saudi businessman to whom it has given more than $11 million. 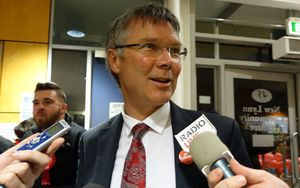 It has accused the former Labour Government of misleading the businessman but remains vague about its own interactions.

In 2009 the National Government excited Saudi exporters when it signalled an end to the ban on live sheep exports - but then went on to extend it the following year.

Now Minister for Primary Industries, Nathan Guy, has put off the release of the relevant documents, saying officials are still working on requests.

"It shows this Government to be without principal and to be totally expedient, so they'll do things which are unprincipled if they think it'll help and I just think that that just undermines the reputation of New Zealand."

As well as giving Hamood Al-Ali Al-Khalaf $4 million, the Government's paying for a demonstration farm and abattoir at his Saudi desert property.

Nathan Guy said the farm would showcase New Zealand's expertise in areas such as animal health.

But nearly all the lambs born there have died - the Green Party says they starved.

"The sheep that went up, that were flown up, were a smallish number that were identified as a pilot because this is unfamiliar territory, this is a different environment and yup, it's really, really unfortunate that they didn't have a good lambing season."

New Zealand Trade and Enterprise is refusing to release information about the lambs' deaths, saying animal welfare at the farm is Mr Al-Khalaf's business - not New Zealand's.