Several hundred people packed a school hall in Wellington last night for a climate change meeting, with many accusing the Government of not doing enough to reduce greenhouse gas emissions. 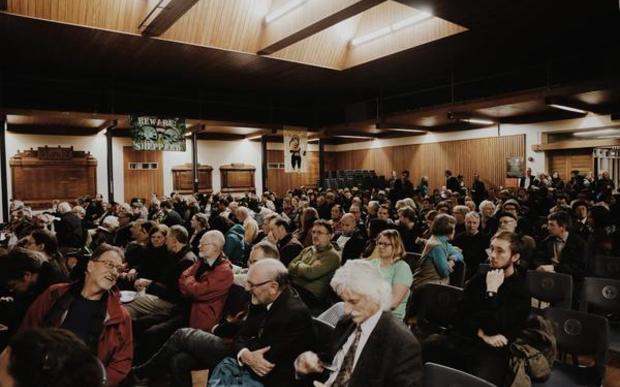 The consultation meeting was part of a series being held throughout the country by the Ministry for the Environment on what the target beyond 2020 should be.

The Government's 2020 target for cutting emissions is 5 percent below 1990 levels, but it needs to put forward a larger target beyond that before December's UN Framework Convention on Climate Change meeting in Paris.

Sustainability Council executive director Simon Terry said the consultation paper was mostly focused on the cost of further reductions. Mr Terry said that approach was not good enough and questioned what the cost of doing nothing would be for future generations.

"When consulting on the target for Copenhagen, the projections for New Zealand of emissions into the future were well laid-out," he said. "There were no such emission projections in this document."

Submissions on the discussion document close on 3 June 2015.

A small but colourful part of the crowd at the Wellington climate consultation meeting pic.twitter.com/skO3iy3Ugu