The New Zealand flag referendum has been criticised as a waste of money and an insult to the country's heritage by members of the public at Parliament this morning. 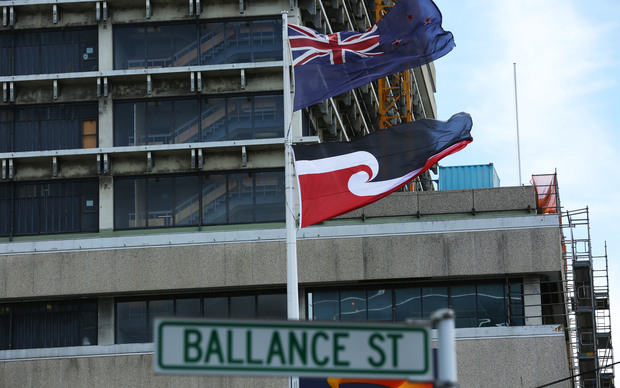 The New Zealand flag (top) will be the subject of a public referendum this year. Photo: RNZ / Alexander Robertson

The majority of those who addressed the select committee hearing submissions on the Referendum Bill were opposed to any change to the flag.

At the end of the year, New Zealanders will be asked to rank four alternative flag designs.

A second referendum will determine whether the country adopts the most popular alternative - or keeps the current flag.

One submitter, Alex Dittmer, told the committee that, having served in the New Zealand Defence Force, he was dead-set against changing the flag.

"If the flag's ever changed, I'll never ever recognise any new flag," he said.

"I'm totally opposed. The referendum is just a complete waste of money.

"I'm not sure but I've heard $27 million just for the referendums. There are so many more things that [it] could be spent [on]... Kids go hungry in this country every day - why are we wasting our time and money on this?"

Aidan Work's submission to the committee was simple - leave the flag alone.

"The statements that have been made by certain people, such as Prime Minister [John] Key, have been verging on insulting the dignity of Her Majesty the Queen, and I take it as a personal insult."

No say for school children

A call today for the Government to allow school students to vote on the future of New Zealand's flag has fallen on deaf ears.

At the end of the year, a postal referendum will ask New Zealanders to rank four alternative flag designs, before a second vote in early 2016 on whether the country adopts the most popular alternative - or keeps the current flag.

Michael Gibson told MPs today that it will be school children who will live the longest with either flag - so their views should be taken into account.

He said allowing young New Zealanders to participate in democracy would generate many social benefits too.

"By being involved in the decision making process school children would feel empowered, there would be an increase in the sense of responsibility of school children.

"There will be a significant increase in family discussions on the flag and I think that's important - this would greatly benefit family life because children might otherwise be omitted from such discussions," Mr Gibson argued.

But a Labour MP on the select committee, Jacinda Ardern, felt that many school children would just vote the way of their parents, amplifying their vote.

"Yeah, I do think there are questions over whether or not it would genuinely be their vote that was being exercised or others... but at the moment we are just looking at those who are enrolled on the Electoral Roll."

Mr Gibson didn't see this as a problem.

"I mean why not, it's perfectly alright for children to reflect the views of their parents if they want.

"But as I understand it, from personal experience and so on, many children are fairly rebellious, and the last thing they'd want to do would be to reflect the views of their (parents)."

The Government has already decided the idea won't fly.

The deputy Prime Minister Bill English, who is running the flag referenda, said only eligible voters would be able to have a say .

Public consultation on the flag referenda, including suggestions for a new flag design, will begin in May.