The New Zealand Government is being urged to step up its efforts to help the people of Syria who are caught in what's being described as the greatest humanitarian crisis of modern times. 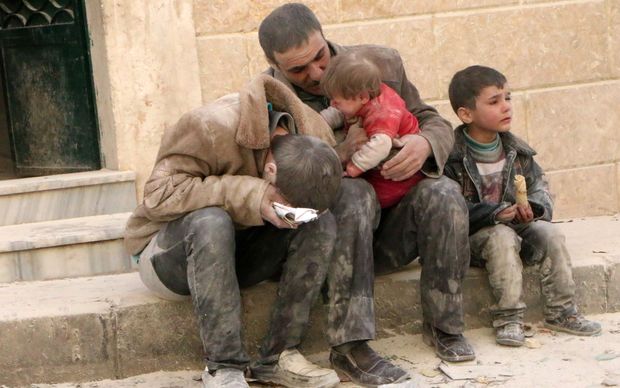 Residents of the northern Syrian city of Aleppo after an air strike. Photo: AFP

As the Syrian conflict enters its fifth year, human rights groups are calling on the Government to use its seat on the United Nations Security Council to push for an end to the fighting.

He said 2014 was the worst year of the conflict yet.

"Most people are just trying to get on with their lives, stay alive, look after their families and children - and want no part in the conflict.

"For most people there, things are still desperate, civilians are still there caught between the barrel bombs of President Assad dropping them on civilians, residential neighbourhoods.

"And of course the sort of tactics of many of the armed groups like ISIS that we've seen all too much of."

"New Zealand has an excellent refugee programme it's well regarded. But it's tiny in terms of the numbers that we take."

"We take a total of about 800 refugees a year, that's about a third of what Australia takes on a per capita basis."

In 2013, Prime Minister John Key blasted the United Nations Security Council for its inaction on what he said were blatant war crimes being committed in Syria.

"It is imperative now that the Council acts," said Mr Key at the time. "It must adopt a resolution that responds to the use of chemical weapons, it must find a means to hold those responsible to account."

Save the Children chief executive Heather Hayden said now New Zealand had a seat on the council, it should use it.

"The key thing in Syria now is to do something to try and either stop the war or get humanitarian aid inside the country so that the children and the families and the people there have some relief."

But she said that did not look likely now, and Syria was being ignored the international community.

To date, New Zealand has committed $14.5 million in humanitarian support for those displaced by the ongoing violence in Iraq and Syria.