Green Party co-leader Metiria Turei says the party has no shortage of high-calibre male candidates from which to pick a replacement for Russel Norman.

Dr Norman has announced he will step down as the party's co-leader at the Greens' annual meeting in May but will stay on as an MP. 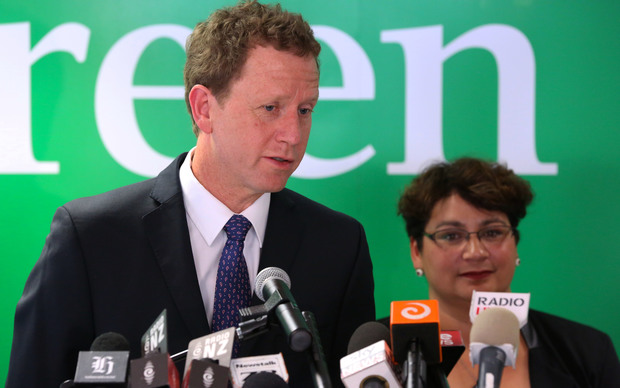 Russel Norman and Metiria Turei at yesterday's media conference where he announced he would step down as co-leader. Photo: RNZ / Alexander Robertson

Ms Turei said Dr Norman had given the party ample advance warning he was stepping down, meaning the selection of a new male co-leader would be smooth.

"We are spoilt for choice with a wide range of high-calibre men in this party who could be potential leaders.

"The caucus has agreed not to comment on any potential candidates until the party makes its decision in May."

One of the party's founders, Jeanette Fitzsimons, has praised the work of Dr Norman.

Ms Fitzsimons said it was sad to see him go.

"But I think everybody comes to a time in their career when they need to move on. He's given a heap over the the nine years he's been in Parliament.

"He's given up so much of his personal life, if he feels it's time to go then that's his right."

Ms Fitzsimons said the Green Party will survive Dr Russel's departure, just as it did the death of Rod Donald and her own resignation.

Senior Green Party MP, Kevin Hague, who has been tipped as a potential contender, declined to say whether he would put his name forward.

He said however that Dr Norman left the leadership in good heart and the party was robust enough to cope with a leadership contest.

"I don't think people are going to be panicked that this is a disaster because party members will be aware that there are lots of solid people available who would be possibilities to succeed him."

Dr Norman said after nearly a decade in the job, it was time for a change and new leadership for the party.

"It's quite intense as well being the co-leader of a party that's really a challenger party - we've doubled our market share and you don't do that unless you really push hard and try to be the best in the business and the fastest and the smartest and I've really enjoyed that challenge and I guess I'm going to miss that."