Green Party co-leader Russel Norman is to stand down from the role after nearly a decade.

Dr Norman will remain co-leader until the party's annual general meeting in May, and afterwards will stay on as an MP.

He said after nearly a decade in a role, it was time for a change and new leadership for the party.

"My replacement will start from a strengthened base and will have a full parliamentary term to establish himself in the role and take the Greens into government in 2017.

Dr Norman said he wanted to spend more time with his family and find a new challenge for himself.

"Being co-leader while raising a young family has been an interesting experience, one that I feel has enriched my political work and strengthened my passion for building a better world for the next generation," he said.

And he told reporters at Parliament his decision might have been different if the Labour and the Greens had achieved a better election result last year.

"Obviously if we had have been in government I think it would have been different, but I was very proud of the election result we got...so we're in a strong position, but you know from my point of view I wouldn't be leaving if the Green Party was in a weak position."

He explained why he had made the announcement now, rather than immediately after last November's general election.

"After the election it's a time where there's I think a lot of change going on, it's probably not obvious from the outside but there's a lot of internal change that happens within political parties in the post election period.

"It's a pretty busy time so I wanted to make sure I had a good summer break to have a good think about it - it's something I've thought about for a long time."

Nominations for a new co-leader, to join Metiria Turei, will open on 20 March and remain open for almost a month.

Meetings with candidates will be held around the country in the last weeks of April and an election will be held at the Green Party's AGM on the final weekend of May.

Dr Norman said he was proud of his contribution to the Greens and gratified to have been part of a team that led the party to its two most successful election results.

"I want to thank my colleagues in the Green Party for their unwavering support during my nine years as co-leader. 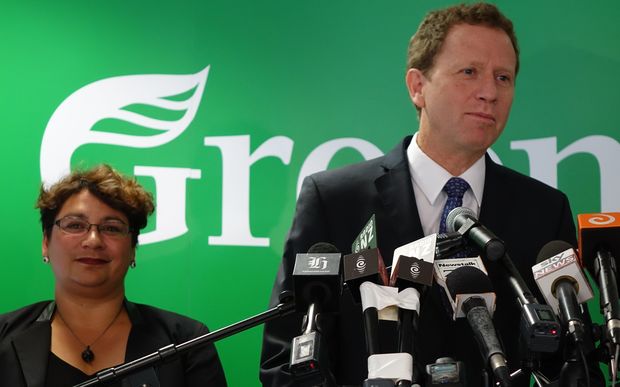 "In particular I want to thank Metiria Turei. Together we have built a true political force that serves New Zealanders well and offers genuine choice and leadership on the issues that matter."

Ms Turei, who became emotional during her response to Dr Norman's resignation, said the job was hard with a young family.

"There is of course life outside the leadership of the Green Party and Parliamentary politics.

"Russel stepped up when we needed him most, he has led with passion and with drive since [former co-leader] Rod Donald's death."

Ms Turei said the party is in a strong position and the election of a new co-leader will be seamless.

Senior Green MP Kevin Hague said it was sad because Dr Norman had been a terrific leader for the party.

"But in a way pleased for him, he's made a decision on his own terms and I think his rationale is absolutely clear."

The Greens had been aiming for 15 percent in September's election, but their party vote actually slipped from 11.06 percent to 10.7 percent.

Dr Norman had been co-leader since 2006, when he replaced Rod Donald who died suddenly - at the time he was co-leader outside of Parliament.