Prime Minister John Key will today broadly describe what action New Zealand may be willing to take in as part of the international effort against jihadist group Islamic State.

He has said the options range from sending in special forces troops in a training capacity, to increased diplomacy. 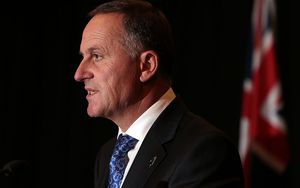 In a speech in Wellington this morning Mr Key also will spell out out what the Government intends to do to about New Zealanders wanting to fight for IS.

He will discuss legal options for more easily limiting the movement of anyone wanting to go abroad to fight for IS.

International relations expert Robert Ayson said New Zealand risked a drawn out fight that could lead to more military involvement, depending on how the Government responds to ISt in Iraq and Syria.

The US is sending more than 1600 personnel to Iraq, and the Australians have begun air strikes.

Professor Ayson, director of the Centre for Strategic Studies at Victoria University, said there was a spectrum of possible interventions.

They ranged from more humanitarian aid, helping with logistics, medics, engineering and intelligence, to providing arms and military training, or sending troops.

"You don't know how long this will take, and it could be a slippery slope towards more significant military action.

"The pros are more that this is an area in which New Zealand does have credibility and capacity.

"The special forces have a strong reputation, they are good in the training role, and these are things they've done before."

The president of the New Zealand Association of Islamic Federations, Anwar Ghani, fears intervention will lead to repercussions for Muslim communities here.

He said media reports over the weekend of a Hawke's Bay man supporting IS have already led to threats against innocent Muslims.

"(We) had a person making calls to individuals in Hawkes Bay who are Muslim and of Maori descent and saying that they have made these comments, and saying 'I've got a hundred people in my church and they are ready to attack this guy.'

"Is this the kind of New Zealand we want to end up with? This is going to affect the Muslim community the most, which is a minority community, and that is what we are concerned with."

Kurdish-New Zealander Sirwan Namo has family living near near the Iraqi border, some of whom are fighting against IS.

He is in favour of military assistance and said there was a moral obligation for countries to get involved.

"I personally am not a (violent) person, I'm against any kind of war, but when it comes to defending other humanity, I believe that this is our job to defend any kind of innocent people from tyrants, despite race and religion."