The Green Party is calling on the Prime Minister to support the former MP Hone Harawira's Food in Schools Bill, at least as far as a select committee, so a public debate can be held. 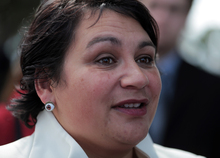 Greens' co-leader Metiria Turei has picked up the bill in the new parliamentary term. The legislation would have the Government provide breakfast in all decile 1 and 2 schools.

Ms Turei said John Key needs to demonstrate that child poverty is one of his priorities.

She said the prime minister had talked about wanting to combat child poverty, and supporting the bill to select committee would show he was serious about that.

Ms Turei said the bill could come back before the House for its first reading to be completed as early as tomorrow.