Prime Minister John Key says he will de-classify spy documents to prove that the Government Communications and Security Bureau is not carrying out mass surveillance of New Zealanders. 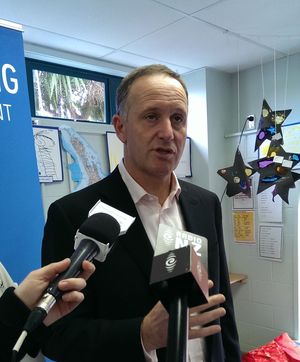 John Key talking to the media about the GCSB. Photo: RNZ / Demelza Leslie

Mr Greenwald - who received leaked documents from the fugitive security analyst Edward Snowden - told TV3 the Government had engaged in extraordinary amounts of metadata analysis, both here and overseas, yesterday.

John Key is promising to release classified documents that will counter any of those claims made.

Mr Key said the details that Mr Greenwald and Mr Dotcom will release refer to a business case that the GCSB was working on for widespread cyber protection, but it was never finished.

Mr Key would not speculate about what Mr Greenwald would say at tomorrow's meeting, but was adamant the Pulitzer Prize-winning journalist would be proved wrong. 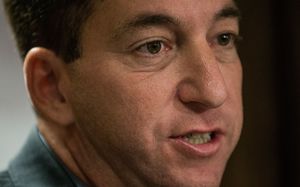 Mr Key said the GCSB could assist police, Security Intelligence Service or the defence force, but would not be drawn on what data the GCSB would be looking for if it searched for metadata.

He said if the SIS had a particular group of New Zealanders who they thought might pose a terrorist threat the GCSB could provide support for that.

Revelations could cause 'diplomatic blow back'

International relations lecturer at Victoria University Robert Ayson said similar revelations about the GCSB could embarrass the New Zealand Government - but they should not come as a surprise.

"The GCSB is primarily asked to look at overseas targets, if New Zealand wasn't seeking intelligence from overseas targets intercepting signals then we'd want a fair bit of our $70 million a year money back from the GCSB budget."

Thomas Beagle from the Council for Civil Liberties said in the past the GCSB had not defined collecting metadata as a form of surveillance.

Metadata showed details of who people are communicating with and when, but not the content of the communications, he said.

Mr Beagle said if the GCSB has been collecting metadata it would be a significant invasion of privacy, which would undermine democracy.

He said Mr Key was worried about what Mr Greenwald might reveal.

"He's going to have to provide some pretty full answers to whatever questions that are raised."

Mr Cunliffe said the new claims could be enough to swing the election in Labour's favour, yesterday.

Mr Cunliffe has given an assurance he had no knowledge of a plan for the GCSB to carry out mass surveillance of New Zealanders.

The Prime Minister has revealed the GCSB had considered a business case for widespread cyber protection, but that he pulled the plug before it went ahead.

Mr Cunliffe said, as far as he was aware, no one in Labour was briefed on that.

He said he would prefer to have been told, but it was up to the Prime Minister to explain why it was kept secret.

New Zealand First leader Winston Peters said he believed Mr Greenwald, and that Mr Key was in a difficult position over the claims.

Mr Peters said the Prime Minister's problem was that he claimed not to have known about the raid on Kim Dotcom's Coatesville mansion.

He said that either meant Mr Key was not telling the truth, or had no idea what was going on in his own department.

Green Party co-leader Russell Norman said it was outrageous the Prime Minister was at one stage contemplating plans for mass surveillance, but did not tell the public.

Dr Norman said the Prime Minister should have said something much earlier.

"In the middle of the giant debate about the GCSB the Prime Minister was considering plans to enable mass surveillance of New Zealanders by the GCSB, that's according to the Prime Minister's own words today and he told us nothing about it."

Former leader of the National party, Don Brash said tomorrow's announcement would almost certainly damage National in the lead-up to the election.

Mr Brash told Radio New Zealand's Sunday Morning that whatever is announced would not be good for the party.

"It's hard to see how it can help them at all, how much damage it does is difficult to judge."

Mr Brash said he would have expected Nicky Hager's Dirty Politics book to have had more of a negative effect on National in the polls than it has.