A political scientist is asking why National Party leader John Key knows so much about a private company's advertising he said was due to appear in a newspaper next week.

At The Press leaders debate last night, Mr Key used the pending advertorial to defend progress on the Christchurch rebuild. 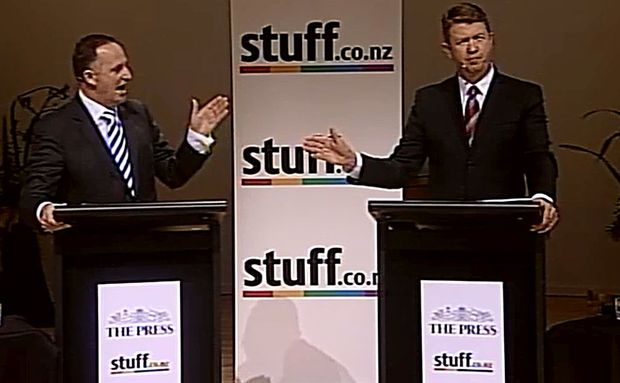 The debate moderator, Press editor Joanna Norris, put it to Mr Key that the Government had managed to complete only one of its main rebuild projects - a boardwalk.

"Actually Joanna you know that's not right," Mr Key said. "Because your newspaper, either this week or probably now next week, is going to deliver in the newspaper a very big supplement, that's going to sell I'm sure extremely well, which points out there are 200 buildings in the CBD alone that are basically completed."

Mr Key later clarified that it was an advertisment by a third party. "No, it's not the government, it's Colliers, one of the big real estate companies. My understanding was that it was going to go in this week - it's actually going in next week."

Ms Norris said she was surprised and puzzled as to why he cited an advertisement that has yet to appear in the newspaper to defend the Government's rebuild efforts in the city.

"I don't feel he did answer the question, and he chose instead to discuss an advertisement which I would have thought was outside his brief as Prime Minister."

A political scientist at the University of Canterbury, Bronwyn Hayward, said she was surprised Mr Key knew so much about Colliers' advertising plans in the middle of an election campaign. "(I was) concerned actually because who's paying for that advertorial," Ms Hayward said.

Mr Key said he was confident it would not cross the line in terms of the Electoral Commission's strict rules regarding third-party advertising.

"No, it's nothing to do with National, it just simply says here's the CBD, this is how it's going, and by the way it's filling up real quick."

The Electoral Commission's rules on third party advertising are aimed at ensuring there is a level playing field during the election. The test is whether a reasonable observer would regard a publication as encouraging voters to vote, or not vote, for a certain party or candidate. In addition, there are limits on how much individuals or groups who want to influence voters can spend.