Labour is promising official recognition for the five main Pacific languages if it becomes the government. 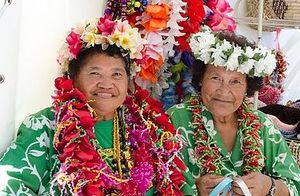 Labour says it would boost support for Pacific languages it elected to government. Photo: Photo NZ

The languages are Cook Islands Maori, Niuean, Tokelauan and also Samoan and Tongan.

It is important for lifting educational achievement by Pasifika children, he said.

"The language is important. The research tells us that children who understand their heritage language have a strong academic base for the future."

Mr Sio said Labour would enable children to learn in their Pacific language from early childhood through to tertiary education.

New Zealand also needs to act quickly to ensure the survival of some Pacific languages, he said.

"We've got a critical situation there with the loss of languages, and particularly with the realm countries of Cook Islands, Niue and Tokelau where 75 percent of their population are now New Zealand-born."

He said the 2013 census shows the languages will be lost without official support.

Labour is also promising to resume publication of reading materials for Pacific bilingual education, and to reinstate bilingual goals in the Pasifika Education Plan removed by the National-led Government in 2009.

Other policies include funding 1500 Pasifika trades training places over four years and investigating the establishment of a Pasifika television channel.