The Internet-Mana alliance has launched its election campaign, promising to create 100,000 jobs annually and develop a digital workforce. 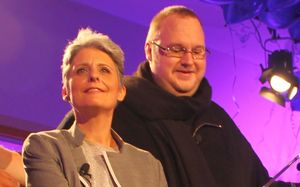 At the launch in Auckland this afternoon, it pledged to create 50,000 permanent jobs, and 50,000 short-term jobs per year.

More than 300 people turned up to the event, which included a speech from the party's founder Kim Dotcom.

Internet Party leader Laila Harre said it wanted to shift the Government's focus from managing unemployment to ending it.

She said there was an urgent crisis with the level of unemployment in this country.

"We believe that the resources we are putting in to the development of the digital economy and to local economic development will provide sustainable long-term permanent jobs as well as give a real boost to people who are at the margins of the labour force now."