Prime Minister John Key has confirmed National will do electoral deals in Epsom and Ohariu, but there will be no accommodation for the Conservatives in East Coast Bays. 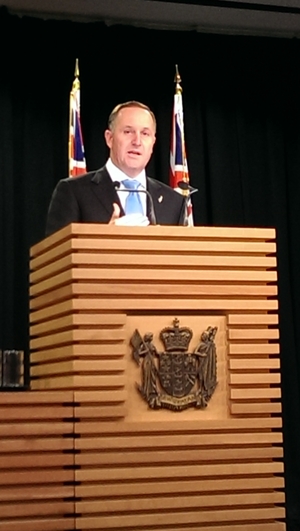 Mr Key says National would have had to withdraw its MP Murray McCully from East Coast Bays to ensure a win for the Conservative's leader Colin Craig, who is standing in that seat, but that would have been a bridge too far.

However, he is asking National supporters to support ACT's candidate in Epsom and United Future leader Peter Dunne in Ohariu for the electorate vote.

Mr Key told reporters on Monday that National would consider working with Mr Craig and his party if they are elected to Parliament on 20 September.

He reiterated National's willingness to discuss a support arrangement with New Zealand First if that party is returned to Parliament.

Earlier, John Key told Radio New Zealand's Morning Report programme there was no guarantee that Colin Craig would win if Murray McCully vacated the seat, so Mr McCully would be on the ballot for the electorate.

"Yes it would be my expectation he would stand there. I'm sort of, at one level, uncomfortable with the view that you would pull someone off the ballot paper. I know that's been the view that Colin Craig's taken, but it's not as straightforward as doing that. National pulls its candidate off the ballot paper - someone else could always stand there."

Mr Craig said he never expected National to give up the East Coast Bays seat for him. He admits he is unlikely to beat Mr McCully, but is confident that the Conservatives will cross the 5 percent threshold required to get into Parliament.

"Some people say we should have contacted National and should have sorted out some sort of deal but I'm more comfortable that we haven't. I don't think the voters would have responded well to that."

Mr Craig said he was happy with the support he was getting at grassroots level. "I got more people out to my public meeting in Nelson than (Labour Party leader) David Cunliffe did."

Murray McCully, the Foreign Affairs Minister, holds East Coast Bays with a majority of more than 14,500 votes. Under National's party list released on Sunday, one list-only spot was free, which kept open the option of Mr McCully withdrawing from the electorate race.

The party's rules say only five candidates can have a place on the list without contesting an electorate seat. Senior MPs David Carter, Bill English and Steven Joyce have three of the list-only spots, sitting list MP Jiang Yang the fourth, and the fifth remains open.