Prime Minister John Key is further distancing himself from the Donghua Liu donation allegations against Labour, after the businessman changed his story on Wednesday. 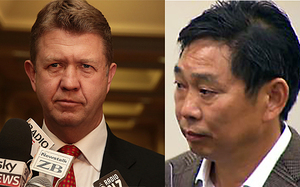 The New Zealand Herald, which reported on Sunday that Liu had spent more than $150,000 on the previous Labour government, now says Liu has changed his statement.

The newspaper originally reported that Liu had paid $100,000 for a bottle of wine at a Labour fundraiser.

Labour leader David Cunliffe has criticised reporting of the original claims and wants an apology,

saying the party is considering its options including legal action.

Mr Cunliffe said he also wanted Liu to make public any evidence that he's given any money to the Labour Party.

John Key - who last week said he had known of the alleged donations for weeks - on Wednesday said it is a dispute between Liu and Labour.