Prime Minister John Key is winding up his three-nation Pacific tour with a visit to Niue. 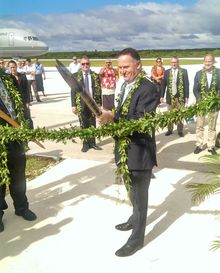 During the week, Mr Key and his team of delegates visited Samoa and Tonga and announced further aid funding while in both countries.

On arrival on Thursday Mr Key opened the new terminal of Hanan International Airport, cutting the ribbon with a ceremonial spear.

He announced New Zealand would give $1.25 million to support tourism and renewable energy in Niue and provide $250,000 to help ensure the stability of its electricity grid.

Niuean Premiere Toke Talagi said he was keen to talk to Mr Key about further support New Zealand may be able to provide to help develop tourism on the island.