The speaker of the Vanuatu parliament has declared the seats of the prime minister, the deputy prime minister and 16 other government MPs vacant.

The government had filed a motion to have the speaker, Gracia Shadrack, removed; a feud which saw the MPs and prime minister Bob Loughman boycott parliament for three days last week.

This morning, Shadrack said their three days' absence meant their seats were now vacant, announcing the suspended MPs one-by-one during a dramatic session of parliament.

But MPs, including prime minister Bob Loughman, refused to leave their seats, with security guards called onto the floor of parliament as a shouting match developed.

"This is not proper. It does not honor the rights of a person who has allegations against them, the right to respond," said Loughman, referring to a motion of no confidence in the government that was also due to be heard.

"And I hope Mr Speaker what the chair has done here this morning represents the democratic way not just here in Vanuatu but around the world." 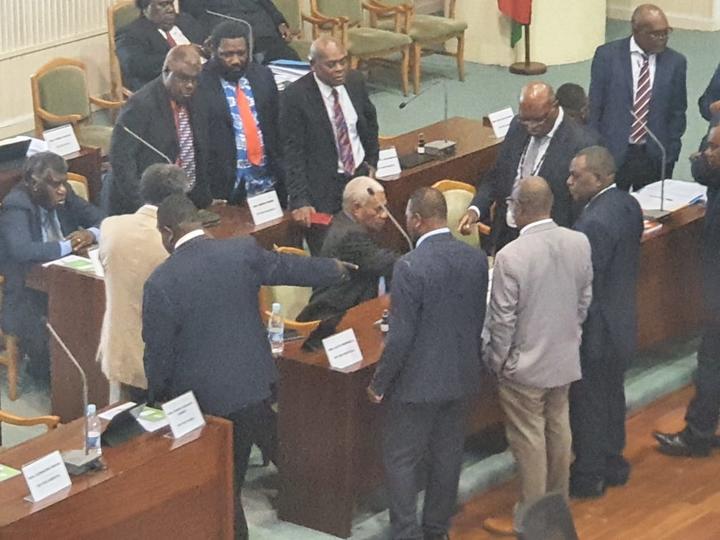 Parliament has now been adjourned until Friday, with neither of the motions having been debated.

Speaking to RNZ Pacific after he adjourned parliament, Shadrack said he expected a challenge.

"They have their constitutional right to go to the Supreme Court to determine over my announcement this morning," he said, adding that his actions amounted to restoring "the integrity of the parliament."

"If they win they will come back, otherwise there will be by-elections in 18 seats throughout Vanuatu."

The project leader of the Pacific Hub at Australia's Griffith University, Tess Newton Cain, who is a ni-Vanuatu citizen, said the government likely has a strong challenge against the speaker.

"I am not sure how strong a case the speaker is going to have," she said.

"And also it is not completely clear, why the speaker only chose to vacate those 18 seats and not everyone who was absent. So you know I think that undermines his claim to be acting impartially."

The same provision cited by Shadrack this morning was used last June to suspend 22 members of the opposition, which was challenged in the Supreme Court.

The government withdrew the suspension before it could be heard, but the Supreme Court ruled in the opposition's favour.

An opposition motion of no confidence in the government was also due to be heard this morning.

Correction, 8 June: An earlier version said it was 17 other government MPs. The correct number is 16.