Fiji's Red Cross has grave concerns for people on the Southern Lau islands of Ono-i-Lau and Vatoa, after communications went down. 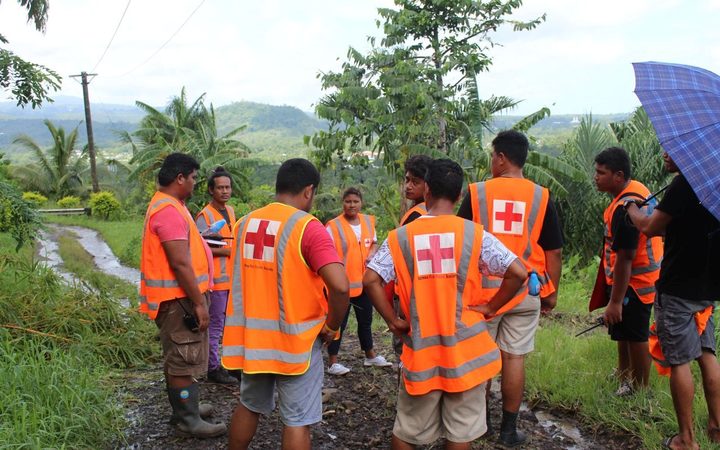 Fiji's Red Cross says its volunteers are getting out into communities hit by Cyclone Gita to understand what help people need. Photo: Twitter / Fiji Red Cross

Fiji's weather service has cancelled its cyclone warning for the southern island group and the storm is expected to pass directly south of the main islands overnight.

The cyclone has been upgraded to a category five - the highest possible -and is moving west out into open waters.

None of the Kadavu, Matuku and Moala Islands should be directly hit, but they would experience gale force winds of up to 120 kilometres per hour.

But communication was cut to the Southern Lau islands - about halfway between Tonga and Fiji - Tuesday afternoon with winds gusting to 275 kilometres an hour.

The devastation in Tonga showed just how vulnerable these lower-lying islands were.

"These are atolls and the biggest concern is the surge waves that are being generated by this wind and if it's going to be there for an extended period of time then we could expect that the impact on the community could be devastating."

Mr Nainoca said it would be Thursday at the earliest before communications could be re-established to assess the needs of about 400 people on each island.

The storm which, made landfall on Tonga with category four force, ripped roofs off houses and destroyed a Catholic church.

The medical officer for Fiji's Southern Lau group said if remote islands lost telephone contact due to Cyclone Gita they would lose direct contact with doctors.

Dexter Chute, who is based at Lakeba Hospital, said nursing staff on the at-risk islands of Votoa and Ono-I-Lau relied upon telephone instruction for serious medical cases.

They appeared to have lost telephone contact this afternoon.

Dr Chute said without telephone links, nursing staff would be the only medical help available.

"They are unable to come over to our hospital with outboard engine boat, it's just too far and the seas will be way too rough. It's a far greater risk to try and bring them over in that way. We used to have an RT which would cover for the group but unfortunately it's not working at the moment."

The last time a category five cyclone hit the Pacific was in February 2016 when Cyclone Winston killed 44 people in Fiji.

The Director for Fiji's National Disaster Management Office Anare Leweniqila said the cyclone put the 2500 people living on Ono-I-Lau and Vatoa at risk.

He said main urban areas like Suva faced a lower level threat from Cyclone Gita but people should be taking precautionary measures and still prepare for gale force winds.

Huge storm surges were anticipated and the three Ono-i-Lau evacuation centres were located inland from the coast.

Satellite loop of TC Gita, showing how dynamic and complex tropical cyclones can really be...Looks like Gita underwent an eyewall replacement cycle, meaning the eye has reformed and is now surrounded by a strongly defined eyewall, the location of most intense winds in a TC. ^NZ pic.twitter.com/e72qJECLrE

Mr Leweniqila said people in Lau were told to prepare for the worst.

"Like putting their boats on land, tying up their houses, taking down the weaker shelters, sheds that they normally have around the house," he said.

People should also make sure they knew where their designated evacuation centre was, in case they needed to leave home.

New Zealand MetService forecaster Mathew Ford said people in New Caledonia and Vanuatu should also be aware of any possible impacts of Gita and listen to updates from meteorological services in those countries.