An American man who escaped custody in Tonga and sailed out of the country after a dramatic high-seas standoff has been detained in American Samoa.

A reporter with American Samoa's KHJ News said this man was the only occupant of the Sea Oak. Photo: Tauva Esera

Dean Jay Fletcher, 54, had been accused of the murder of his wife, who was found beaten to death while the couple were anchored in the northern islands of Vava'u late in July.

He was due to appear in court next week, but in the early hours of last Thursday, Mr Fletcher somehow managed to escape from a police cell in Neiafu and flee on his yacht, the Sea Oak.

Tongan maritime police gave chase, but after what was reported to be a dramatic five hour stand-off, including an incident where Mr Fletcher allegedly fired flares at police and threatened to set their boat on fire, it was called off.

Despite aerial searches, no further sign of Mr Fletcher's yacht was found.

But on Monday, 600km to the north in American Samoa, a small white yacht sailed into Pago Pago Harbour on a sunny, placid morning.

On board was a tall, wiry man with straggly shoulder-length blonde hair who tried to refuel at the busy port, according to Monica Miller, RNZ International's correspondent in Pago Pago.

"But there was a tanker in the way and the refuelling operations that normally take place did not occur today," said Ms Miller. "So he was leaving, and in fact had been out maybe just over five miles, when the marine patrol unit went out and brought the yacht back in." 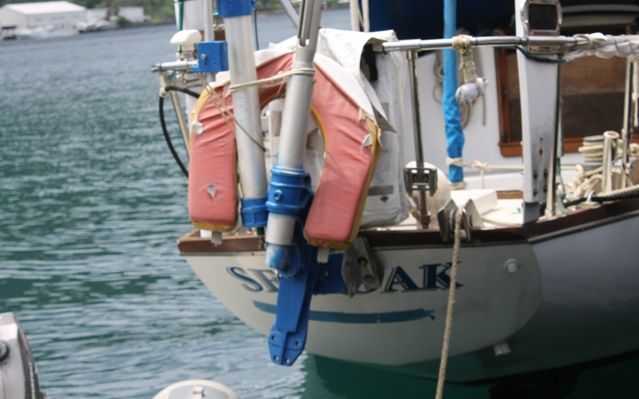 The Sea Oak was shepherded in by authorities and kept outside the marine patrol docking area. The man, who the territory's attorney-general later confirmed was Mr Fletcher, appeared to be relatively unconcerned, said Ms Miller, at one point taking a nap in the sun.

"There was a bit of confusion as to what basis he would be held, because we do not have an extradition treaty with Tonga."

On Tuesday evening (NZT), American Samoa's police commissioner announced that Mr Fletcher had been detained for a "customs violation", and refused to give any further details.

In a statement, Tonga's police commissioner, Steve Caldwell, said proceedings had begun to try and return Mr Fletcher with the attorney-general's office and the US Department of Justice.

He also announced that a team of senior officers had been sent to Vava'u to investigate how Mr Fletcher managed to escape police custody.

"I have obvious concerns over this matter," said Mr Caldwell. "People will be held to account if accepted procedures have not been followed."

In American Samoa, too, authorities were trying to work out if Mr Fletcher would be charged for the "customs violation" and how they could return Mr Fletcher to Tonga.

"We don't really have any precedent in this case," said Ms Miller. "In the all the years I've been reporting here - which is more than 30 - I don't recall anything like this happening before.

"But, I am told that American Samoa belongs to some transnational crime unit and there are some protocols in place."