A murder suspect in Tonga continues evade police on the high seas, after he escaped from a police station in Vava'u on Thursday. 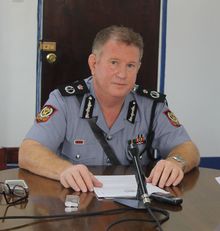 Dean Jay Fletcher, a 54-year-old US citizen, faces a charge of murder following the death of his wife while their yacht, Sea Oak, was anchored in Vava'u.

But Mr Fletcher escaped from a local police station in the early hours of Thursday morning and sailed away on his yacht.

Police officers managed to track him down about 16km northwest of Vava'u, but the pursuit was called off when Mr Fletcher fired flares at their boat.

The police commissioner, Steve Caldwell, told Matangi Tonga that aerial searches were continuing, and the Tongan navy had also been called in to help with the search.

He said a full investigation had been ordered into the escape.