A professor of constitutional law Bill Hodge says Vanuatu's President may have the power to reverse the pardons controversially granted at the weekend to 14 convicted MPs.

The Speaker of Parliament, Marcellino Pipite, yesterday pardoned himself and the other MPs while he was standing in as acting president while Baldwin Lonsdale was overseas.

On Friday, they were found to have accepted bribes offered by then opposition leader Moana Carcasses to lure support for changing the government.

Professor Hodge says the pardons had the veneer of constitutional legitimacy but there is possibly a way forward.

"So the Attorney general will be doing some research and I bet he can't find any precedents but I think it's worth a go and I bet he (the President) can pass effectively a royal pardon in reverse and say 'the purported pardon issued by my substitute is reveresed and is invalid and cannot be relied upon so that the judicual process can continue'."

Vanuatu's traditional chiefs have called on the president to revoke the pardoning of the MPs.

The President of Port Vila Town Council of Chiefs, Isaac Worwor, says the authorities have to be careful not to set worrying precedents which could affect investment in Vanuatu.

"We're really concerned about the respect (for) the judiciary. Like the President has said no one is above the law. We have to make sure that everyone is being treated equally. We have to treat whoever committed a crime the same as others."

Chief Worwor says if there is to be any pardon it should wait until after sentencing which is due next week. 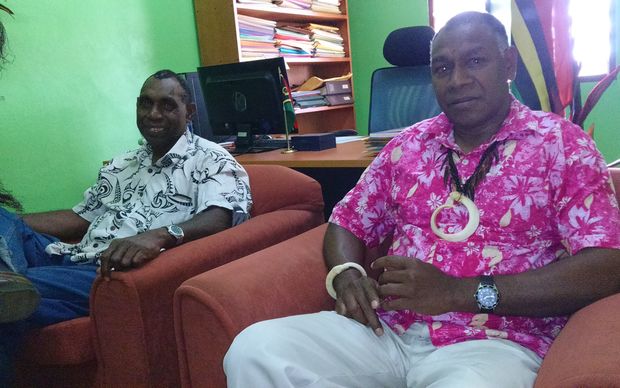 Mr Lonsdale is vowing to take action over the decision by his acting president.

He returned to the country on Sunday and has since been in meetings with political and civil society leaders, including former presidents and the influential National Council of Chiefs.

At a news conference in Port Vila last night, Mr Lonsdale expressed his sorrow for what he called the "unlawful decision" made by Mr Pipite to pardon the MPs in his absence.

He said he had consulted the State Law Office on several options available to him and he would make his decision in the next few days.

He said no one was above the law and he would do everything he could to make sure that justice prevailed at all times.