Vanuatu's government has been severely shaken, and its future is uncertain, after half its MPs were convicted of bribery.

Hundreds of people gathered outside the Supreme Court on in Port Vila on Friday, to find out that 14 government MPs --including deputy prime minister Moana Carcasses and other ministers -- had been found guilty of giving and receiving corrupt payments.

"I therefore find the charges of corruption and bribery of officials proved by the prosecution beyond reasonable doubt, and the following accused persons are accordingly convicted as charged," Justice Mary Sey told a packed courtroom in Port Vila, ending a summary that took her more than two hours to read.

Only one MP, Robert Bohn, was found not guilty and acquitted. Another MP, Willie Jimmy, had already pleaded guilty before the trial.

The MPs were accused of having accepted bribes offered by Mr Carcasses, who was then opposition leader, to secure their support in a vote of no confidence in the then-government.

Mr Carcasses has admitted to offering loans to MPs from his own funds, but denies they were bribes to lure support for changing the government.

But Justice Sey says the evidence shows that the payments were corruptly given and accepted by MPs to influence their roles as public officials. 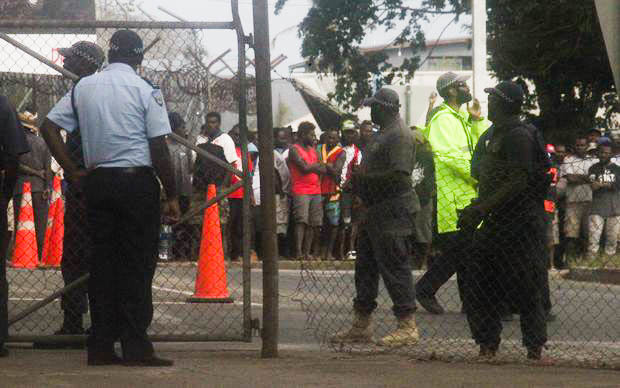 Large crowds gathered outside the Supreme Court to hear the verdict in the bribery trial. Photo: RNZI / Hilaire Bule

The chair of Vanuatu Women Against Crime And Corruption, Jenny Ligo, says the announcement was historic and serves as an important lesson to leaders.

"People have looked up to, they have put their trust in and now that they are held responsible for what they have done," she said. "The people want to see that the constitution of Vanuatu, the laws of Vanuatu are upheld."

An opposition MP, Ralph Regenvanu, says the decision means most of the government's 27 members are now convicted criminals.

He's calling on them to go.

"In other countries people in these positions would have resigned once they were charged. Now that they've been convicted it remains to be seen whether they will do that honourable thing and resign, but judging from the fact that they didn't resign when they when they were charged, I wouldn't hold my breath about that."

Mr Regenvanu says the government is now hopelessly compromised, and the Prime Minister has a big decision to make. 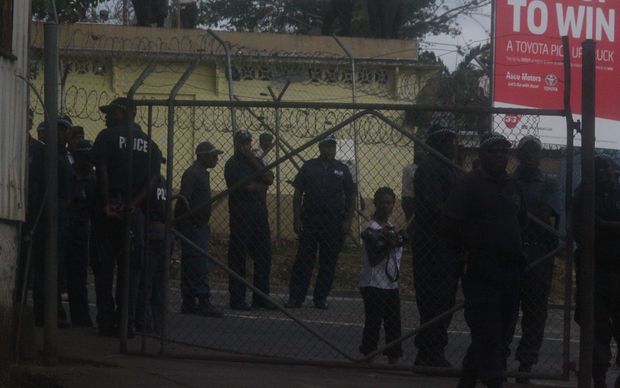 There was a heavy police presence in Port Vila on Friday as people feared civil unrest after the verdict. Everything remained calm. Photo: RNZI / Hilaire Bule

Under Vanuatu law, the MPs are likely to automatically lose their seats once sentenced, and if that happens the government will likely become a minority one.

Mr Regenvanu says all sides need to come together to work out how the laws will be applied, so there can be a stable outcome for the governance of Vanuatu.

"That decision can either be that he resigns, or he tries to find a way to bring some of the opposition into his government, or we all sit down together and then decide what's the best government that we can have that is going to take the government through to the next by-elections for all these seats, or whether we need to dissolve parliament and just have fresh elections because the cost of by-elections for 15 seats is probably going to be close to the cost of a general election."

The MPs will return to court for sentencing on October the 22nd, while Moana Carcasses has already announced that the MPs plan to appeal against the ruling.

Mr Carcasses and other MPs contacted for comment have not answered their phones, and neither has the prime minister's office.

Unconfirmed reports say on Saturday one of the convicted MPs, Marcellino Pipite, moved to pardon himself and the other convicted MPs in his capacity of acting president.

Mr Pipite, who is the speaker of parliament, became the acting head of state because the president, Baldwin Lonsdale, is out of the country.