The Vanuatu government says it will do everything it can to make it easier for people to rebuild their homes.

The nation's capital, Port Vila, was devastated by Cyclone Pam, with at least 80 percent of buildings damaged or destroyed when the category five storm hit late on Friday. 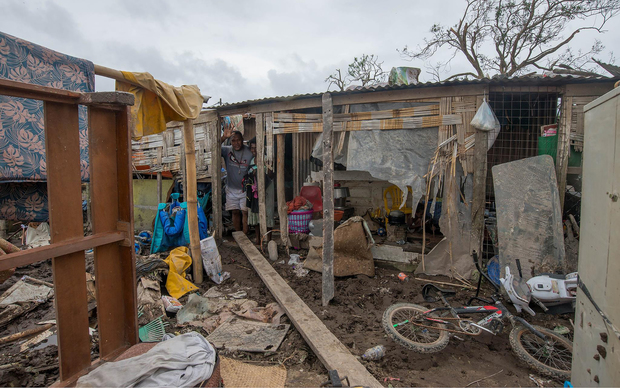 Residents in the remains of their cyclone-damaged home. Photo: Humans of Vanuatu

With wind gusts of more than 300 kilometres per hour, the storm razed homes, smashed boats and destroyed crops. Aid workers describe the situation as catastrophic.

The official count of confirmed deaths is six with 30 people injured, however those numbers are almost certain to rise as rescuers reach outlying islands.

The scale of destruction on the surrounding islands remain unclear, though a pilot who made it to the southern island of Tanna has reported widespread destruction.

"The Government is going to exempt all construction materials from any government taxes to allow people to access them cheaply because the main concern is shelter," Mr Regenanu said.

"With the state of emergency we can access about 1.5 percent of the budget immediately for this purpose."

Most of the schools in the Port Vila area have been extensively damaged.

Only one ward of the country's main hospital is functioning after much of the building's roof was torn off in Cyclone Pam.

The newest wing of Vila Central Hospital, opened just a few months ago, is the only part left standing and all the hospital's inpatients are there, Mr Regenvanu said.

He said temporary emergency centres have been set up.

Acting Police Commissioner Colonel Job Esau said all police officers have been recalled from leave in preparation for what would be a massive recovery operation.

Police in Port Vila last night placed some areas off limits, such as such as shopping areas and the waterfront, in a bid to stop any attempts at looting.

"Facilities, installations, private sectors, and also from the yachts that have been washed away by the cyclone. Those are the only areas we have been targeting at the moment, and also some other very affected locations in and around Port Vila."

A New Zealander who runs a scuba diving in Vanuatu said at least 20 yachts were lost or sunk in the cyclone.

Mike Crawford is the part owner of a scuba diving company Big Blue in Port Vila, which employs 14 staff.

He told Checkpoint the remains of a yacht were thrown up onto the foreshore in front of his shop.

"And apparently three - a husband, his wife and a kid - were on the yacht when it got caught. They got thrown into the water. They were swept up onto the land by the raging, by the waves and they actually survived." 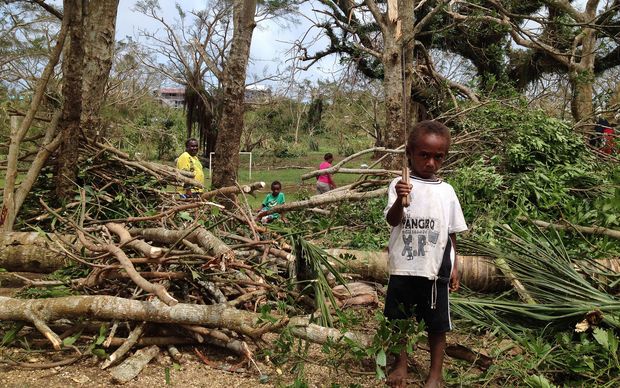 Tanna Island 'in ruins' after Pam

The first report from one of Vanuatu's more remote islands suggests devastation on a massive scale in the wake of Cyclone Pam.

The full force of category five storm hit Tanna Island on Saturday night, but at that stage the extent of damage on the island of some 29,000 people was unclear.

The head of the Red Cross regional office in Suva, Aurelia Balpe, said a Red Cross worker had made it to Tanna and witnessed an island in ruins.

"What they saw was lots of debris, the foliage was completely destroyed, lots of uprooted trees.

"All corrugated iron structures destroyed, concerte structures, all of them without roofs.

"And, of course, with all the debris we are very worried about the potential injuries that people may have suffered."

The worker reported two deaths, yet to be be confirmed by Vanuatu's government. 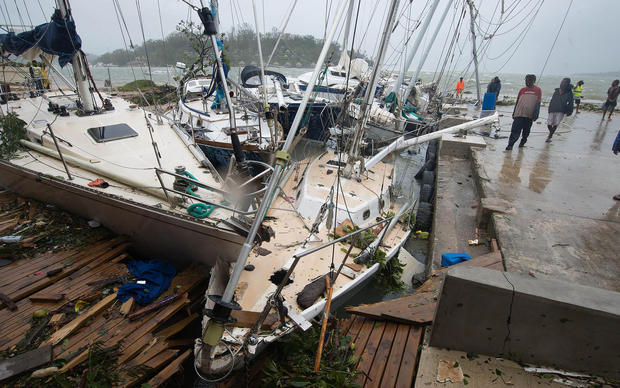 Yachts at Port Vila were tossed about in the cyclone. Photo: Humans of Vanuatu

Mr Regenvanu said he had never seen as much destruction in the country.

The Lands Minister said it could be the worst cyclone to ever hit Vanuatu.

"We've only declared a state of emergency in Shefa province because that's where the government is located.

"With the other provinces, because we have no connection at all, we want to get some level of assistance first before a declaration is made.

"I'm 100 percent sure this will be a national state of emergency, simply because this is the biggest cyclone that's ever hit Vanuatu."

CNK Real Estate managing director Loic Bernie said there was a queue of people outside his office this morning looking for houses.

Power was still out to about two-thirds of Port Vila but some shops were able to re-open with essential supplies.

An Australian living in Vanuatu said the lack of power was hindering efforts to get the country running again.

Mr Phillips said today was normally payday, but with banks closed and ATMS not operating because of a lack of power, people could not buy food.

"We've been running around this morning to try to get money to give to our staff so they can buy food but no-one's got any money, the banking system isn't working, so that's a major problem," he said.

"And then, of course, getting the power on - that's a next stage problem. All the supermarkets, all their frozen food will have gone off by now."

A UNICEF worker in Port Vila, Alice Clements, said people were now getting on with the clean-up.

"We're seeing people working really industriously to clean the roads and to cut down electrical cables in Port Vila that have been literally covering the roads and [are] very dangerous.

"There's a long long way ahead of us, but now people are sitting down thinking, 'okay, what do we need to do'."

She told Morning Report people were searching for food and eating root vegetables and fruit which has fallen from the trees but that'll only sustain them for a week.

The impact of high seas at Port Vila, on Saturday.