By Laura Revell of

Comment: Microplastics are found in the most remote places on land and in the ocean as well as in our food. Now several studies around the world have confirmed they are also present in the air we breathe. 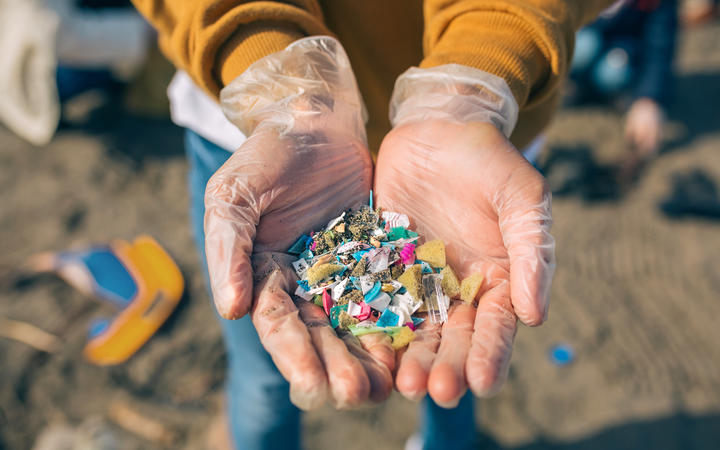 In our research, published today, we investigated for the first time how airborne microplastics behave in the atmosphere and whether they contribute to a warming or cooling of Earth's climate system.

Other types of airborne particles (aerosols) such as dust, sea spray and soot either scatter or absorb sunlight, and as a consequence they cool or warm the climate system. We found microplastics do both.

In this first study to link airborne microplastics and climate change, we highlight just how widespread microplastic pollution is and the potential it has to influence climate on a global scale.

The current concentration of microplastics in the atmosphere is low and they have only a very small influence on global climate at this point. But given projections for a doubling of plastic waste over coming decades, we expect microplastics could have a larger impact on Earth's climate system, unless we take action to address plastic pollution.

Microplastics are tiny fragments or fibres shed during the degradation of larger pieces of plastic. They are light enough to be transported by the wind over large distances.

Recently, researchers have confirmed microplastics in remote mountain catchments, in Arctic snow and in conservation areas. Earlier this year, we reported them in atmospheric fallout collected in New Zealand.

Other studies have shown that once microplastic pollutants enter the ocean, they don't necessarily remain there but can leave the sea with sea spray and, driven by wind currents, return to the atmosphere. 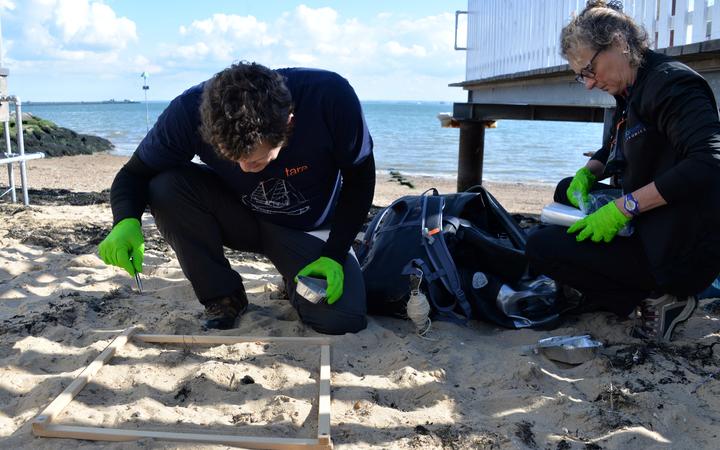 Researchers look for microplastics on a beach at Southend-on-sea near London in June 2019. Photo: AFP

This has led us to think of a plastic cycle: microplastics don't stay in soils, rivers, the ocean or air, but move between different parts of the Earth system.

Initially, we expected airborne microplastics would scatter sunlight like most aerosols, which act like tiny disco balls and reflect sunlight back to space. This has a cooling effect on Earth's climate.

Most types of aerosols in Earth's atmosphere scatter light - therefore in general, aerosols have partially offset greenhouse gas warming in recent decades. One exception is soot (or black carbon), which is good at absorbing sunlight and has a warming effect.

We found that, overall, airborne microplastics are efficient at scattering sunlight, which implies a cooling effect on climate. However, they can also absorb radiation emitted by the Earth, which means they contribute, in a very small way, to the greenhouse effect.

The highest reported concentrations of airborne microplastics (thousands of fragments per cubic metre of air) were measured at urban sampling sites in London and Beijing.

We don't know yet how far up into the atmosphere microplastics have reached, but an aircraft-based study found them at altitudes of up to 3.5km.

This presents additional questions whether microplastics could alter atmospheric chemistry by providing surfaces for chemical reactions to occur on, and how they interact with clouds.

The magnitude of microplastics' influence on climate varies in our climate model simulations, depending on assumptions we made about how the plastic fragments are distributed throughout Earth's atmosphere.

Because airborne microplastics research is so new, we had a limited number of studies to inform our research.

Our study shows the influence of microplastics on global climate is currently very small, and a cooling effect dominates. However, we expect it to increase in future, to the point that airborne microplastics exert a climate influence comparable to other types of aerosols.

An estimated 5 billion tonnes of plastic waste has already accumulated in landfills or the environment to date. This figure is projected to double over the next three decades. Without serious efforts to address microplastic pollution, mismanaged plastic waste will continue to increase the abundance of airborne microplastics, and their influence on the climate in the future.

Laura Revell is a senior lecturer in Environmental Physics, University of Canterbury