Analysis - Is New Zealand navigating the China-West, politics-trade relationship in a craven way? Increasingly that seems to be the view from overseas, and especially Australia. 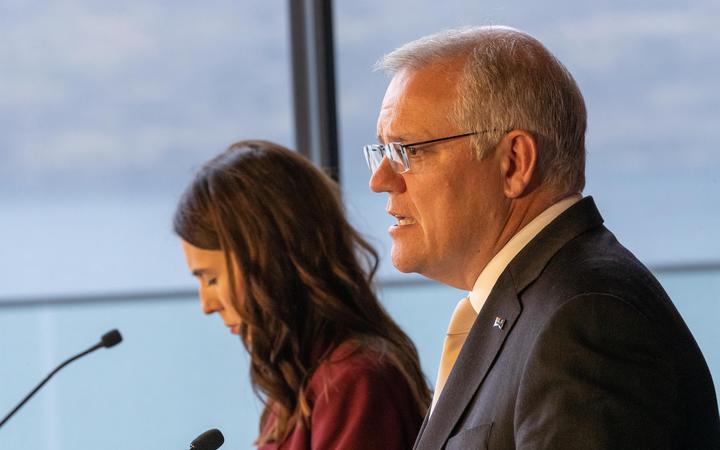 New Zealand's relationship with China has been in the spotlight while Scott Morrison has been meeting Jacinda Ardern in Queenstown. Photo: 2021 Getty Images

This critique was boiled down to its essence in last night's Australian Channel 9 18-minute documentary, Kiwis might fly, which you can watch on YouTube here: Dollars VS Decency: Is China taking over New Zealand?

This is the broadcast that controversially advertised itself with the question about whether New Zealand was becoming "New Xi-land".

The gist of the report is the allegation that New Zealand has gone soft on China in order to profit from better trade relations with the country. The account is generally in line with the position of the Australian government, and makes the suggestion that New Zealand should take the higher moral ground, coming back into line with Australia and other Anglo-Western nations in their more aggressive stance towards Beijing.

You can read a review of the programme by Tom Dillane: Australian 60 Minutes' hit job on Jacinda Ardern Government 'cosying up to' China.

Prime Minister Jacinda Ardern responded to the documentary this morning in her interview on the AM Show with Duncan Garner, saying that New Zealand and Australia aren't so different in their orientation towards China - see Lana Andelane's 60 Minutes: Jacinda Ardern responds to Australian media's 'perception' of NZ-China relationship.

Ardern said: "I think what we're dealing with here is more of a perception issue - particularly, I notice, from the Australian media, than reality".

You can also read Australian reporter Tom Steinfort's article about the documentary here: 'It was smoke and mirrors': Why New Zealand's government appears spooked by the prospect of anyone examining its dealings with China.

In this, Steinfort is highly critical of New Zealand's refusal to side more strongly with Australia on China, but he's willing to put the counter argument: "the Kiwis have actually played this smarter, and they can't afford to rock the boat too much given how dependent their economy is on exports to China."

There has been further criticism of New Zealand from Australia today, with Newshub's Australian correspondent Jason Morrison taking a hard line, warning: "You really think China will embrace you and love you? China will screw you in the end", and arguing that New Zealand must unite with Australia in "absolute lockstep" against the threat - see Vita Molyneux's Australian journalist says NZ needs to 'grow up' and distance itself from China.

The increased heat from Australia occurs at the same time that its prime minister, Scott Morrison, is in Queenstown meeting with Jacinda Ardern. The two leaders have been publicly minimalising the extent to which today's discussion will be about China - see, for example, today's 1News report: Ardern downplays China as point of contention with Australia, but she will 'take issue' with deportations. 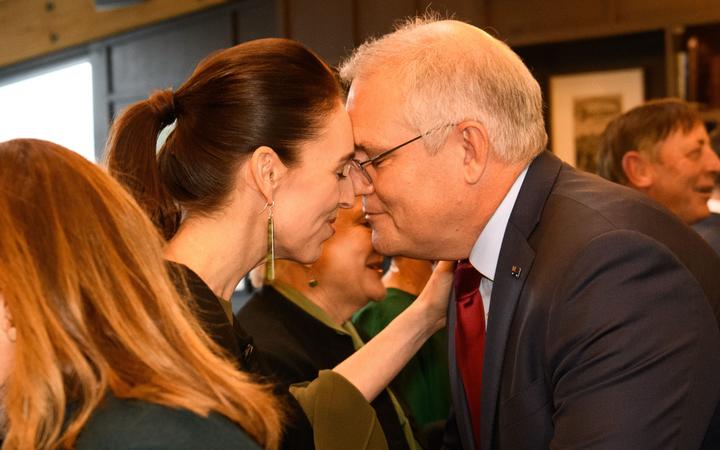 However, China is definitely the big issue. As RNZ political editor Jane Patterson says today, "All eyes today will be on how both leaders position themselves on China in the bi-lateral context, and how far they will go when talking about the impact on the relationship" - see: Ardern and Morrison face tough questions over trans-Tasman relationship and China.

As Patterson explains in this piece, the key issue of contention from Australia (and, more broadly, from western allies) is New Zealand's refusal to formally sign up to Five Eyes condemnations of Beijing: "There was a backlash last year when New Zealand did not join the other Five Eyes members' statement condemning China's approach to Hong Kong. New Zealand said it was reluctant to expand the Five Eyes' brief beyond intelligence sharing; commentary from within other member countries questioned this country's commitment to the longstanding alliance, suggesting it was foregoing past loyalties for the sake of keeping China happy."

The latest Chinese issue of contention for the Australia-NZ relationship is the line being pushed in the US government that Covid-19 escaped from a virology lab in Wuhan, and that Beijing needs to be held to account for this. In his column on this today, Richard Harman says the issue is one that Morrison will push Ardern to come into line on, pointing out that New Zealand has been conspicuous in its silence on the topic - see: Scott drops by to see Jacinda - but Biden is in the background (paywalled).

Harman suggests the virus controversy could be a big test for Ardern this week: "It could well be a defining moment for New Zealand, an indication of whether it is ready to join with the rest of the west in recognising, as one American official last week put it, the era of engagement with China is over. And at the same time, it will be a real test of the trans-Tasman relationship."

Another issue of contention relating to China that Morrison is likely to push Ardern on, is to increase how much New Zealand spends on the military, as discussed in Thomas Manch's article in the weekend, Can the rift be healed? Beneath the tension in the New Zealand-Australia relationship.

In this, one Australian academic, Brendan Taylor, explains that Australia has "become progressively more hawkish, or aggressive in its foreign affairs", and that this has only increased with the appointment of Peter Dutton as Defence Minister.

Some argue that Australia's more belligerent orientation to China, with its clear decision to "ramp up the rhetoric" against Beijing, is due to its relatively strong trading relations with that country - see Luke Malpass' The Jacinda Ardern-Scott Morrison meeting: Powerful optics and chance to talk China.

Apparently, China needs trade with Australia more than it needs it with New Zealand. The argument is that China is desperately reliant on imports of Australian iron ore, which means that Canberra can afford to take on Beijing in a way that Wellington can't.

According to Malpass, Australian war hawks have "been arguing for years that Australia could adopt a more robust attitude towards China without fear of damaging the core parts of the trading relationship. While New Zealand milk is a very important export to China, it isn't as important as iron ore, leaving New Zealand more vulnerable to any economic retaliation."

The debate therefore continues in New Zealand about how to handle the delicate relationship with China. One of the most interesting and useful contributions to this in the last week is by Victoria University of Wellington China scholar and former Ambassador to China Tony Browne - see: We have to handle our relationship with China, not leave it to others.

Brown argues that the issue isn't going away, nor is China's dominance: "our significance for China will continue to be primarily political rather than economic. No matter how important our trade is to New Zealand's wellbeing we will be judged in Beijing by what we say rather than what we sell. The New Zealand government needs to work from the assumption that in 10 years China will be more prominent, not less, across almost the full range of our international interests."

New Zealand will clearly continue to follow a path of zig-zagging in relationship to both China and those on the other side like Australia that seek to apply greater pressure against them. Sometimes the government expresses some anti-China and pro-western sentiments, and then it balances this later with an equally pro-China and anti-ally statement.

The latest attempt to show support for the Australian side is the announcement in the weekend, and just prior to the arrival of Morrison, that New Zealand would join Australia in its trade dispute with China over barley tariffs at the World Trade Organisation - see Jamie Ensor's New Zealand to be third party to Australia, China trade row.

Finally, what does Beijing think of the 60 Minutes documentary and Canberra's pressure on Wellington? For an insight into this, see today's analysis in the Global Times newspaper by Liaocheng University's Yu Lei: Kiwis keep sober diplomacy despite aggressive Aussies.

Lei argues that Australia is just continuing to play its role as "deputy sheriff" to the United States, while "New Zealand values its established markets and is unwilling to sacrifice its interests to US hegemony".

* Dr Bryce Edwards is political analyst in residence at Victoria University of Wellington. He is the director of the Democracy Project.