For a game that wears its Akira Kurosawa influence so firmly on its sleeves, Ghost of Tsushima is oddly humourless. It's one of many failings for a game that not only gets the history wrong, it's also a weak homage. Yet, Ghost of Tsushima is nonetheless a triumph for the medium and a fitting swan song for the PS4 which is soon to be superseded by its next generation counterpart, the PS5. 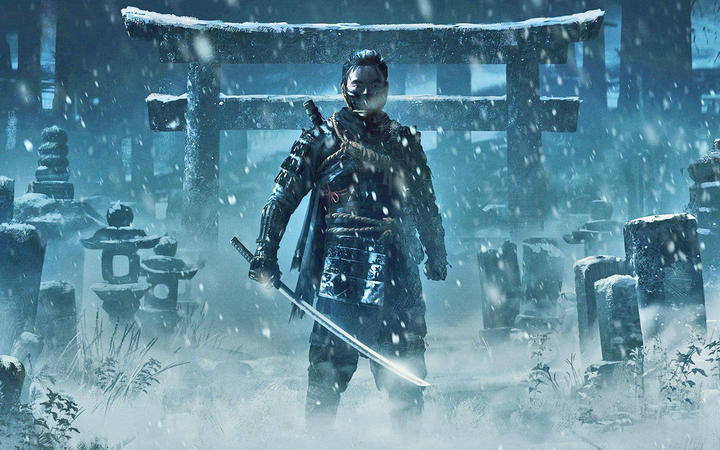 If you're in any doubt to how much the game owes to Kurosawa - the Japanese film maker behind Seven Samurai, Ran, Rashoman and many other masterpieces - it actually includes a "Kurosawa mode" which switches the colourscale to a grey palate complete with grainy crackles. To be fair to studio Sucker Punch, this mode does look incredible and they have, in general, created a beautiful looking game.

Set in in 1274 during the first attempted invasion of Japan by the Mongolian Empire, Ghost of Tsushima follows Samurai Jin Sakai as he fights back the invading force, often resorting to "dishonourable" stealth methods. The setting only needs a brief introduction because the plot is merely a serviceable vehicle for the gameplay to unfold.

The developers have openly admitted they know little about the history of Japan and were working purely from the inspiration they found in Kurosawa films. Yet it appears they also seem to know little about the films of Kurosawa. Aside from characters being in Japan, wielding swords, and the aforementioned "Kurosawa mode" there's little that's recognisable. The game has more in common with the sober and melodramatic 2003 film The Last Samurai than the often funny - dudes rock - vibe of Kurosawa's early samurai films which brimmed with a swagger that was immediately seized upon by western directors for remakes such as The Magnificent Seven.

That lack of engagement with the history, and even with Kurosawa who had regrets about his role in reinventing the myth of samurai, shows. In Ghost of Tsushima, Jin is more than happy to get involved in peasants meagre affairs and tribulations which anyone with a cursory knowledge of Japanese history will tell you is ridiculous. Even in Seven Samurai - perhaps the most defining rehabilitation of samurai in postwar Japan - the samurai are at least paid for their troubles.

The reality, better examined in films such as Takashi Miike's 13 Assassins, Hara Kiri: Death of a Samurai, and Kurosawa's later films such as Ran, was that samurai were a cruel and ruthless ruling class who'd sooner cut down a peasant or merchant for a minor - or even perceived - slight, than wander from village to village making sure they're safe and well.

This would be neither here nor there if it didn't carry such cultural baggage. The false narrative about samurai chivalry and honour, or bushido, which was employed as propaganda to soldiers in World War 2 has persisted, evidently, to this day. Its roots in that war, which devastated China and Korea, are problematic to say the least.

But putting aside these failures, Ghost of Tsushima is one of the best open-world action games of this console generation. The developers have unashamedly taken elements that work from other games, such as Far Cry's enemy base encounters, The Witcher''s world-building, and the tight sword play from Sekiro: Shadows Die Twice which focuses on patience and timing rather than a flurry of button mashing.

And never before has a game looked quite so cinematic while blending in open-world action gameplay. The optional stand-offs prior to larger battles are always tense, with the enemy feigning and yelling while the player waits for the giveaway movement of feet to release to their fatal blow. It's a brave decision for the developers to forego a lock-on system to enemies and instead have free flowing combat based on directional input. The difficulty is well-balanced, with mistakes being suitable punished, without being as brutally unforgiving as Sekiro (though veterans of that game might want to dial it up).

The island Tsushima begs to be explored and the optional extras such as following foxes to shrines, resting in hot springs, and composing haiku are fun and charming distractions from the otherwise violent and tense combat. All these elements work in sync to create a filmic and stylish game that's unrivalled in its commitment to aesthetics.

While the criticisms listed here are not insignificant, it is nonetheless laudable that the developers have striven to make a game that takes inspiration from truly great director. While it fails terribly at capturing the essence of Kurosawa's films, Sucker Punch at least tried to do something new and different. And if it gets even a few players to watch a Kurosawa film for the first time, that must be considered a win.

Ghost of Tsushima is available now for the PS4.