Opinion - Lockdown in London has given Clementine de Pressigny a new appreciation of her neighbours, people she had very little contact with before. 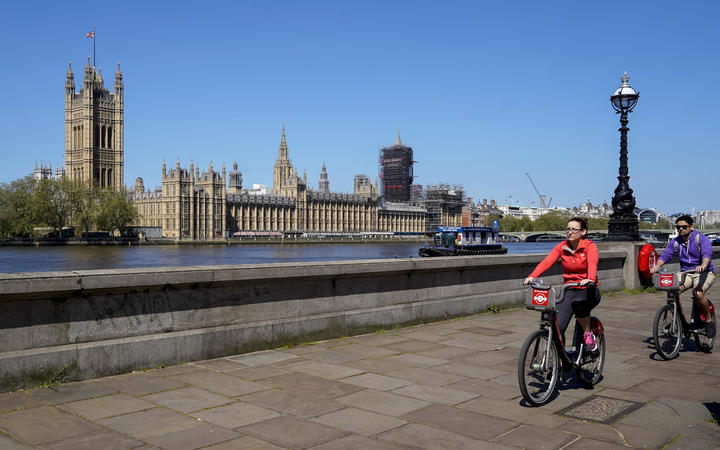 As Britain's Coronavirus situation worsened and the Government's talk of "herd immunity" was replaced with restrictions on leaving the house, regular life for more than 66 million people came to an abrupt halt. Yet my day-to-day life in London, where I've lived for the past 11 years, has remained largely unchanged.

Being a new mother on maternity leave is its own form of self-isolation. I haven't had to adapt to working from home, and my income was already reduced. My freedom had been curtailed; I saw little of friends, constrained by nap times, teething misery and the challenge of navigating public transport with a pram.

For some Covod-19 restrictions have brought total upheaval - jobs lost, homes lost, and so many lives lost. That narrative dominates the news, providing endless fodder for doomscrolling. Yet the reality for many is that this shift has so far been more subtle.

For the past four years life in Britain has been dominated by Brexit, but for a month now, it has been all but forgotten, it's no longer the lens through which all else is seen. It took an unprecedented pandemic to do so.

Much of the ideological split between Brexiters and remainers, particularly between London and much of the rest of Britain, has been blamed on the bubbles we live in, which leave us blind to differing experiences and opinions.

In this city we're used to travelling around the metropolis following predictable paths, criss-crossing through zones to connect with those who share our points of view and lifestyles. We live close to people who we never speak to, we keep our guard up. But now, unable to move freely around the city or visit regular haunts, those we live beside are suddenly more visible. Many of us have turned towards our neighbours, hastily throwing off the unspoken agreement to ignore each other.

On 22 March, a day before lockdown proper began, I found a note slipped under the door: "Dear Neighbour, if you have fallen ill and/or need any help with groceries, cooking or getting medication during self-isolation, please give us a call." I told friends, and as the days went on many of them reported getting similar messages.

People we have lived near for years but didn't know, were suddenly willing to give out their mobile number to total strangers. It stirred up an unfamiliar thrill - a sense of neighbourly community, a way to show compassion beyond our immediate circle.

A few days later I found another note slipped under my door - a few neighbours had set up a Coronavirus WhatsApp support group for everyone living on our street. In normal times the thought of opting in to an endless stream of messages from people I don't know would be extremely unappealing. In normal times it would have seemed invasive. But now I wanted to dive right in.

Suddenly I was in daily dialogue with people on my street. Someone ten doors down had coronavirus symptoms and needed Panadol - which at this point was cleared from stores - and a neighbour dropped it on their doorstep.

There were polite but passionate disagreements of the ethics on getting groceries delivered while more vulnerable people may need the service. There were offers of unwanted Pringles (tandoori chicken fusion) and when one neighbour lamented how difficult it was to find vegetarian food, another offered her tofu - admitting it was slightly past its use by date.

There were parents searching for a brand of baby formula that had disappeared from stores, alongside infant paracetamol - ostensibly stockpiled by worried mums and dads. Other neighbours helped search for these essentials.

There were shared complaints of panting joggers coming far too close to others out for their daily exercise allowance. There was information shared on food centres for those in need.

Grocery shopping is a big topic of discussion. We're used to having access to whatever we want from around the world, as long as you have money to spend. But even before lockdown, basic goods were becoming more scarce - flour (thanks to the quarantine baking boom), eggs, canned tomatoes, pasta. Then came media reports that without workers to pick farm produce, the UK was at risk of running very low on fresh produce.

Getting groceries now requires a lot more planning and time. The neighbourhood Whatsapp group has become a guide, with tips shared on the stores that are most orderly, that provide safe distancing measures, the best times to go and what was in and out of stock.

A lot of us are now shopping locally, grateful for the small businesses providing basics. Not being able to take food access for granted has felt like a portent, but of what exactly remains to be seen.

To say that community connection is a silver lining of coronavirus would be wrong, there is no silver lining to the deaths of thousands, to a health system stretched to the brink, to inequality becoming yet more entrenched.

There are too many for whom daily life has become a struggle for survival. And despite neighbourhoods opening up new lines of dialogue, those people are still largely invisible to the rest of us who are lucky enough to have some savings, have access to gardens and not live in overcrowded, unsafe housing.

But I can't help but feel that these new connections offer a glimmer of hope in this very strange time. My neighbourhood WhatsApp group has already excitedly made plans for a street party when we come out of lockdown, so we can all put faces to the names on our screens.

*Clementine de Pressigny is an editor and writer based in London.