First Person - I'm privileged to be able cover the Rugby World Cup for RNZ, but it means I'll be away from my whanau for 50 days, the longest I've ever been separated from them. 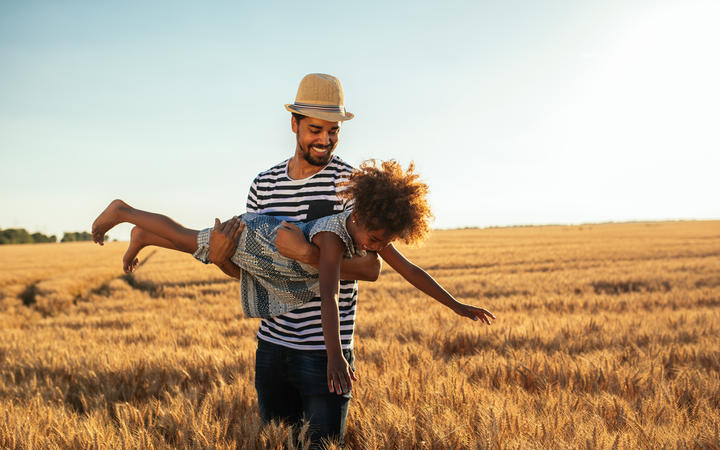 I have three tamariki - two daughters, aged six and four, and a two-year-old son. I miss them so very much. Sometimes unbearably so.

It was reflecting on how hard it is for both journalists, players and management to be away from their families and that led me to write this piece.

As I've grown as a father, and as the depth of my relationship with my kids has evolved, I've become painfully aware of the power parents have to shape their kids futures.

Read more: Rugby World Cup: 'It can be tough' being away from family

As fathers, the behaviour we model in front of our children has an everlasting influence. Getting it right is of the utmost importance. Of course, you can have off days, as we're only human.

It's well known that daughters will often end up in relationships with men similar to their fathers or similar to the relationship that they see play out in front of them. Although, not always, some will seek the opposite.

Growing up in a toxic or abusive household affects children in many ways. If they watch you treating your partner poorly, whether that be emotionally, physically or in any other way, they will normalise it. They could end up in relationships where abuse is present and won't leave, because they think "that's just how it is".

However, if you treat your partner and children with respect and love and understanding, your daughters will know what a loving and balanced romantic relationship should look like. They won't put up with any bullshit from their lovers. They'll get out before it's too late.

The same goes for sons. If you show them that being cruel, disrespectful or angry at your partner is normal, they will treat their future partners in the same way. Show them that the key to a healthy relationship is respect, understanding, support and love, they will (hopefully) treat their partners that way too.

Fathers have the ability to change our society for the better in so many ways, we can empower our daughters to accept nothing less than the best and teach our sons that the best qualities men are honesty, compassion, empathy and kindness.

Our parents' relationship is the most influential example of how to interact and communicate in a romantic relationship.

Children often end up emulating the ways their parents show love, or not, to one another.

The ways in which anger and conflict are managed by partners also plays a large role in how our children will communicate with adult romantic partners.

Arguments or conflict can be dealt with openly and compassionately, with reason and understanding, or with aggression, passive or overt.

Whichever way you and your partner choose to deal with it, your kids will learn to do the same.

Children who regularly see parents fighting or using abusive language are more likely to repeat that pattern with their future partner or accept that kind of behaviour. If kids see their parents having shouting fights, they might believe that kind of behaviour is the only way to solve problems.

Being able to trust your partner is essential to building a healthy, long-lasting relationship - but unfortunately, not everyone grows up with an example of what genuine trust and love looks like.

As Michele Cascardi, PhD, associate professor of psychology at William Paterson University, said: "A loving, supportive parent encourages a trusting view of others, whereas a hostile, rejecting, or unavailable parent erodes trust and safety and contributes to the belief that others cannot be counted on for love and support.

"These formative ideas about trust and safety often carry forward into romantic relationships and affect the quality of the bond that develops between romantic partners."

We should teach our tamariki how to express their feelings as early as we can, using language rather than rash behaviour.

Teach them to set boundaries in their relationships. Help them to understand what are acceptable and unacceptable behaviours and how those behaviours can have positive or negative results. Do this always under the banner of unconditional love.

Show them the unconditional love you have for them in as many ways as you can. Help them to both show empathy for others but also how to communicate that their feelings have been hurt.

We have a rape culture in New Zealand society and all over the world. This problem lies entirely with men.

We regularly tell women not to walk home alone, not to stay out too late at night, not to wear certain clothing. We shouldn't have to tell our daughters these things.

We should be teaching men that the most abhorrent thing they can do is treat women (or anyone) with any kind of violence or degradation. If we teach them those values, then many problems, such as rape culture and New Zealand's shockingly high domestic violence rate, can be fixed.

It won't happen overnight, but dads, it starts with us.