Analysis - Road regulators going cap-in-hand to the public to fund better vehicle inspection systems might encounter a public perception problem over their use of contract labour. 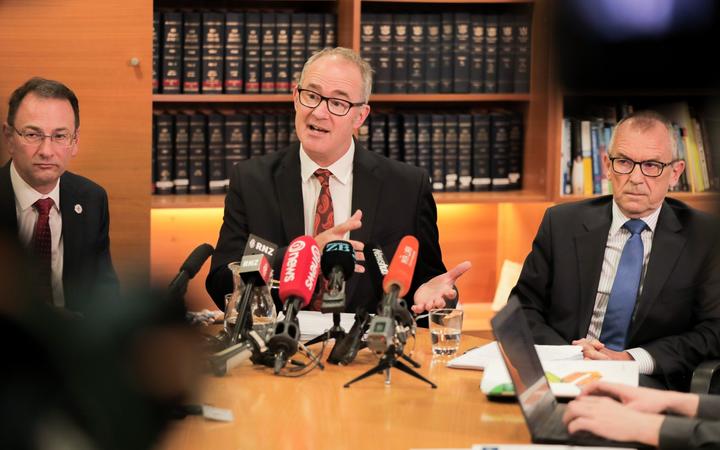 National's claim that things only went south when Phil Twyford took charge of transport is not supported by the reviews. Photo: RNZ / Dom Thomas

NZTA is paying some very fancy headline rates to contractors - up to almost half a million dollars a year, and some have been kept on for years on high hourly or daily rates.

The agency also doubled the size of its PR department last year, from 30 to 60 people, at significant public expense.

Off the back of scathing reviews into mass regulatory failings this week, the Labour-led government promised to pull the agency up by its bootlaces - but at a cost.

This would likely fall on motorists from next year, to the probable tune of the low tens of milllions of dollars, according to Transport Minister Phil Twyford, who pointed out that drivers benefited from safer roads, and user-pays applied.

WOF charges could go up

National says the government's claim that drivers were endangered by the under-resourcing of NZTA's regulatory arm, while money was ploughed into the road-building side, while Simon Bridges was Transport Minister, is hokum.

Its own claim that things only went south when Phil Twyford took charge, is not supported by the reviews, which found years of weak and conflicted leadership, and direction, and performance - bullet-point upon bullet-point of flaws.

The Minister's point is you get what you pay for.

In the case of NZTA currently, that includes getting 21 contractors and paying them a collective $4m last year.

These 21 who were on $150k-plus a year, joined the other 70 other contractors paid less than that amount, in the agency's small high-tech arm.

Two - a solutions analyst and a manager, were paid almost half a million dollars each, on an annualised basis.

One senior project manager collected $320,000 last year, and has been on the payroll for four years prior to that.

This is clearly not a short-term contract NZTA had to deploy in order to find rare skills vital to a particular project, which is how government agencies typically describe high-paying contracts.

It is also far from what the government and State Services Commission might script under the edict last year to build public sector in-house capacity, and cut the rising contractor bill.

The Transport Agency declined to answer RNZ's questions about why it had to pay such high contractor rates, or for so long.

It instead repeated what it regularly tells us now, that its high-tech arm Connected Journeys - where these particular contractors worked - was disbanded this year, after being found to have flouted public sector controls.

Money must be found

As for how many contractors it uses right across the agency, and what it pays them, it said RNZ could wait till it reports back on that to a parliamentary select committee.

Minister Twyford's new funding mechanism will be needed to pick up when a $45m shot of short-term relief to pay for extra regulatory operations, and dodgy WOFs, has been used up.

Somewhere, money must be found to recruit the 100 extra regulatory staff ordered up under the reviews, and to pay for the new top job of road safety regulation tsar, the freshly-minted director of land transport.

But can 100 skilled staff - presumably not contractors - be found, especially when it comes to the likes of engineers experienced enough to know a cruddy truck certification when they see one?

It is not a given: NZTA has been suffering from high worker attrition and low morale, if what RNZ hears from those close to it is correct.

Ultimately, it might not get what it pays for, even if new levies on motorists are employed.